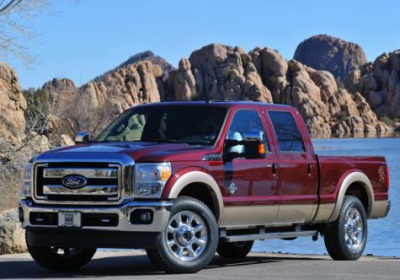 The Ford F-Series has been America's best-selling truck for decades, but along with the good comes the bad, apparently. In addition to being popular with consumers, the Highway Loss Data Institute notes that the F-Series Super Duty has risen in popularity among thieves. Based on its new study, the four-wheel drive crew cab F-250 Super Duty has topped the list for the country's highest rate of insurance theft claims, knocking the Cadillac Escalade from the top spot – a distinction the luxury SUV has held since this annual report was first established in 2003.

To reach its findings, HLDI looks at theft data from the previous three model years (in this case 2010-2012) to determine the frequency of claims for a particular make and mode,l as well as the average payment per claim. As the report points out, the claims aren't always for the theft of the entire vehicle – they can include components (say, wheels and tires) or property taken from the vehicle. At seven claims per 1,000 insured vehicles, the F-250 is six times more likely to suffer a theft claim than the average vehicle.

The Cadillac likely dropped from the top of the list to sixth due to additional theft-prevention features including a steering wheel lock and inclination sensor for the alarm, but GM's other fullsize trucks and SUVs still occupy eight of the list's 10 spots. Some of the least stolen vehicles with below-average loss payments include the Lexus HS250h, Hyundai Tucson, Honda CR-V and Dodge Journey. Head on over to the HLDI's website for the full list that shows the most and least popular vehicles among thieves from 2010 through 2012.

Ford F-250 has highest theft rate of any 2010-12 vehicle;
Cadillac Escalade drops to 6th on list after years on top

ARLINGTON, Va. - The Ford F-250 has replaced the Cadillac Escalade as the favorite target of thieves, the Highway Loss Data Institute (HLDI) reports. New antitheft technology on the Escalade, as well as its waning popularity, are two likely reasons the luxury SUV has fallen from first to sixth place in the ranking of vehicles with the highest rates of insurance claims for theft.

"General Motors has put a lot of effort into new antitheft technology, so that may help explain the decline in the Escalade's theft rate," says HLDI Vice President Matt Moore. "On the other hand, sales of the Escalade have fallen in recent years, so there may be less of a market for stolen Escalades or Escalade parts."

Thieves continue to target large pickups and large SUVs at higher rates than other vehicles. No. 1 on this year's list, the four-wheel-drive F-250 crew cab, has a claim frequency of 7 per 1,000 insured vehicle years, or nearly 6 times the average for all vehicles. An insured vehicle year is one vehicle insured for one year, two for six months, etc.

Theft rates in general are declining, thanks in large part to the spread of ignition immobilizers, which prevent vehicles from being hot-wired and were standard in 89 percent of 2012 models. Fewer pickups than cars or SUVs have the feature as standard, which may help explain the higher theft rates for pickups. However, it doesn't explain the high theft rate of the F-250, which had a standard immobilizer for 2010-12, the model years covered in this year's report.

Many pickup claims result from the theft of equipment from the truck bed, and that may be the case with some of the F-250 claims. HLDI's data don't distinguish theft of vehicle contents or components from theft of a whole vehicle.

Each year HLDI analyzes theft losses for vehicles from the three previous model years. This is the first year since 2003 that some version of the Escalade hasn't topped the list of vehicles with the highest theft claim rates.

This year the Escalade has a claim frequency of 5.5 per 1,000 insured vehicle years. Though still more than 4½ times the average, that's about half the rate for 2007-09 Escalades reported in 2010. Only the regular four-wheel-drive version of the Escalade is included in this report. Other versions didn't have sufficient exposure or claims. To be included, a vehicle must have at least 20,000 insured vehicle years or 100 claims.

The Escalade always has had a standard ignition immobilizer, but thieves still could tow away the SUV on a flatbed truck. Since 2010, the Escalade has had a steering column lock as well. An improved version of this feature, along with an inclination sensor that sets off an alarm when the vehicle's angle is changed, was added in the 2012 model year. One indication these new features may be helping is that the average loss payment of each Escalade claim has fallen to $6,508, suggesting fewer whole-vehicle thefts. In contrast, the average loss payment for 2007-09 Escalades was $11,934. Other antitheft features, including a wheel-lock system, are available as options on 2012 models.

HLDI's theft numbers differ from other rankings because they are based on the number of insured vehicles on the road. In contrast, information published by the National Insurance Crime Bureau simply lists the most frequently stolen vehicles. As a result, that list usually reflects the most commonly driven models.