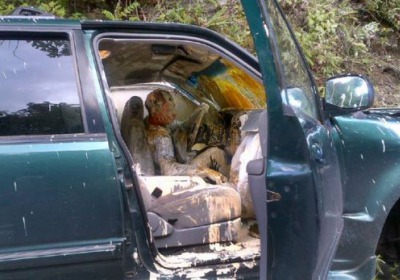 Among the many useful pieces of driving advice we've taken to heart over the years, "Safely secure all cargo" is etched pretty high on our personal stone tablets. We've had a couple of frustrating moments over the years (numerous wonky cupholders and too-tall lidded cups; a radar detector that released its suction cups and dashed itself below the dashboard, etc.), but never anything like the scene above.

These photos above come courtesy of the Washington State Patrol, and they show the unfortunate aftermath of a driver, his dog, and his Ford Explorer after it crashed near the town of Belfair last week. According to reports, the man was schlepping five-gallon containers of paint inside his vehicle when he was involved in an unexplained accident. It's not clear what triggered the crash, but the impromptu abstract painting covered the whole of the interior, including the driver and his faithful companion.

The man was transported to a local hospital for minor injuries, and his dog was cleaned and later taken to a humane society.