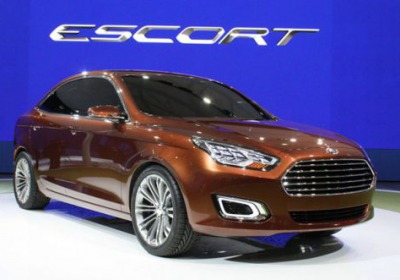 Ford is kickin' it old school at the Shanghai Motor Show for 2013 with a new Escort Concept – "a name that stirs up thoughts of basic, affordable transportation rather than great driving dynamics or bold design" as we said in our initial preview of the small C-segment sedan. Or, as Ford puts it, "Customers in China described seeking a vehicle that is stylish – but not one that is arrogant or pretentious." Potato, potahto...

It's an interesting amalgam of design notes with Ford's recent and stylish hexagonal grille up front, flanked by some pretty busy LED light clusters and chrome-trimmed air intakes at the lower extremities of the fascia, but the Escort Concept is not altogether unattractive. Besides its external appearance, we really don't have much information to report – Ford has not yet hinted at what may be powering this little machine, but we'd expect something with four cylinders and less that 2.0 liters of displacement sending a modest number of horses to the front tires.

It probably goes without saying, but we don't expect to see this Escort make its way to the United States, since we already have the Focus and the Fiesta battling it out in the econobox segment. That said, it's very likely to spawn a production model that will roll out here in China and in other developing market where multiple C-segment entries are becoming increasingly common. Check out our high-res image gallery of live images above, and let us know what you think of the car's styling, then scroll down below for the official press release.