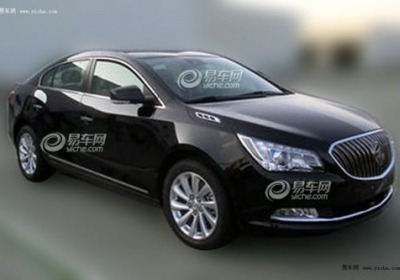 Back in September, General Motors promised nine new or refreshed models for its Buick and GMC brands within 12 months, and while we've already seen what the updated 2014 GMC Sierra will look like, we're now getting our first look at what appears to be the facelifted 2014 Buick LaCrosse. Judging by a set of spy shots posted on Autohome showing a Chinese-market model, the updated sedan is getting a pretty big makeover, including a completely redesigned interior and a refreshed exterior.

From the outside, all of the usual midcycle updates have been made to the LaCrosse, including new lights and fascias. The new front end features a larger, reshaped seven-sided grille, LED-trimmed headlights and Buick's signature portholes are now mounted on the side edges of the hood to be more visible. The rear view has similarly small yet refined changes such as the new decklid with a chrome brow that stretches the full width of the car, to a more squared-off rear fascia with exhaust outlets pushed out to the corners. From the single shot we can see, the LaCrosse's new rump looks very similar to the Hyundai Equus.

The second-generation LaCrosse helped reestablish Buick as a near-premium automaker with its interior quality, and the next model could very well up the stakes even more. The new cabin design ditches the wraparound wood trim on the instrument panel and door panels for a smoother, more contemporary look. While it's hard to make out all of the changes, we can instantly see that the center stack is now more upright with fewer buttons, but the biggest news might be the cabin technology the 2014 LaCrosse might offer. Checking out the shot of the center console, we see what looks to be a pad similar to the handwriting recognition technology used by Audi, which would make this a first for GM.

There's no word on when (or where) the 2014 LaCrosse will be introduced, but based on GM's timeline of "nine cars in 12 months" and the lack of camouflage in these pictures, we're guessing that we could see the facelifted sedan very soon.