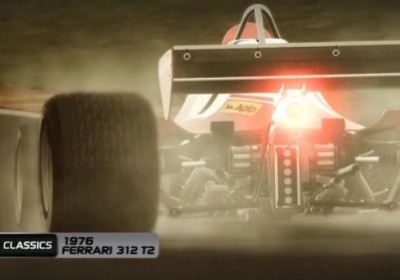 We'll cop to the fact that we might be a bit overly excited about the upcoming F1 2013 video game, specifically the Classic Edition. Codemasters has released umpteen trailers for the title already, mostly pretty cool ones, with cars lapping classic Formula One tracks that are set to be included in the fun.

With that said, this very latest historic addition to F1 2013 is pretty worthwhile, we think. Doing a kind of double promotion with Ron Howard's upcoming film Rush (which you all know by know to be the story of Niki Lauda, James Hunt and the chase for the 1976 F1 Championship), Codemasters is making the 1976 Ferrari 312 T2 a playable car in its new game. That's right, you can now walk in Lauda's racing boots, without all the painful crashing and superhuman recovery bother. Watch the video trailer below.

Los Angeles – Friday, September 13 – Codemasters® today released a new video revealing the 1976 Ferrari 312 T2 set to star in the movie Rush opening this weekend, which will be playable for all F1™ 2013 gamers who sign up on RaceNet, Codemasters' free online community hub (www.racenet.com). F1 2013 is the latest entry in the award-winning series of officially licensed FORMULA 1™ video games and will launch on October 8 for the Xbox 360 games and entertainment system from Microsoft, PLAYSTATION®3 computer entertainment system and Windows PC from Steam and is available for pre-order now.

The 'Classics' Trailer reveals the breadth of content set to star in F1 2013: CLASSIC EDITION. This collector's edition features bespoke box art and expands F1 2013's full simulation of the 2013 season and 1980s classic content with additional classic content from the 1990s and two additional classic tracks – Imola and Estoril. The trailer shows the iconic 1976 Ferrari 312 T2 in action, legendary drivers, including Nigel Mansell, Alain Prost and Michael Schumacher, racing cars that defined their eras, and contemporary content from the 2013 season. The video is now playing at www.youtube.com/formula1game.

All players of F1 2013 who are members of RaceNet will be able to receive the 1976 Ferrari 312 T2 as a free reward. RaceNet, Codemasters' free online community hub, powers a range of features including the new ability to set Time Trial challenges for their friends, receive new gameplay challenges, track their in-game progress and compare stats against their friends. Gamers who have not yet signed up on RaceNet can do so today in advance of F1 2013's release at www.racenet.com, where players can also connect their other supported Codemasters titles.

F1 2013's classic content is available in a new game mode, F1 Classics, introduced by legendary broadcaster Murray Walker. F1 Classics features a new fictional racing series, allowing players to race cars, drivers and circuits from different eras. Teams are represented by drivers who raced in specific cars, such as Mario Andretti in the 1986 Team Lotus 98T, and drivers who have also represented each team in different eras, such as Michael Schumacher racing Ferraris from the 1980s. Classic content is also available in a range of other game modes, including split-screen and online multiplayer modes. The full list of classic content set to feature in both F1 2013 and F1 2013: CLASSIC EDITION can be found at www.formula1-game.com.

F1 2013 will also feature all the cars and stars from the 2013 season, allowing gamers to race as Lewis Hamilton in his Mercedes and Sergio Perez in the McLaren-Mercedes for the first time, and includes all of the rule changes, tyre changes and remodelled handling to authentically reflect the challenge and exhilaration of racing 2013's stunning roster of cars. A range of enhancements, improvements, split-screen and online multiplayer, plus new and returning game modes deliver the most complete simulation of a FORMULA ONE™ season in videogame history. The additional classic content set to feature in F1 2013: CLASSIC EDITION will be made available as separate packs as downloadable content for F1 2013.

Hunt down all the latest F1 2013 news straight from the studio by racing over to www.facebook.com/formula1game or follow the team on twitter at www.twitter.com/formula1game.