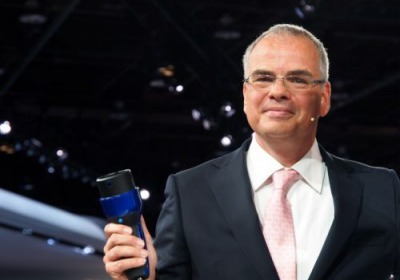 He was too talented not to surface somewhere, we just didn't know where and when. Nine months ago, Stefan Jacoby stepped down from his post as Volvo CEO, a move that caught many off guard. At the time, the separation was called "amicable," but word is that the strong-willed executive clashed with owners Geely and the automaker's board.

Jacoby will have a new set of challenges on his hands, as he has just been named Executive Vice President Consolidated International Operations for General Motors. That means the Hannover-born Jacoby will head up the company's operations in Asia, Africa, Europe and the Middle East, where he will be responsible for over 100 countries and territories. Jacoby succeeds Tim Lee, who has been named chairman of GM China. Lee will also retain his post as Executive Vice President Global Manufacturing.

Jacoby's dealings with Geely should help him in his Asian market duties, but he also counts time as the head of Volkswagen of China on his resume, so he's very well-versed in the market's peculiarities.

For more details on GM's executive changes, check out the official press release by scrolling below.

DETROIT – General Motors today announced it is strengthening its International Operations management team in order to build on the company's leadership position in China, the world's largest auto market.

Tim Lee will become Chairman of GM China with responsibility for 12 joint ventures, two wholly owned foreign enterprises and more than 55,000 employees. Lee has spent nearly four years in charge of GM's International Operations. He will continue in his role as Executive Vice President Global Manufacturing. Bob Socia, president of GM China, will continue to report to Lee.

Stefan Jacoby, most recently the CEO of Volvo Cars, will become Executive Vice President Consolidated International Operations, leading the company's operations in more than 100 countries and territories in Africa, Asia Pacific, Europe and the Middle East.

"Stefan is a great addition to an already strong team," said GM Chairman and CEO Dan Akerson. "We expect him to continue building on his record of delivering results in markets around the world."

In addition to running Volvo Cars, Jacoby's nearly 30-year career includes positions at Mitsubishi and several key jobs at Volkswagen. Jacoby will report to Akerson and begin on August 5.

"I'm excited to join a company that's delivering beautiful, high-quality and fascinating vehicles and is committed to improving the total customer experience," he said. "The GM team has plans to win in every market, and I'm eager to contribute."

In his role as Executive Vice President Global Manufacturing, Lee has responsibility for manufacturing, labor and manufacturing engineering. GM and its joint venture partners produce vehicles, engines, transmissions and components in 168 manufacturing plants in more than 30 countries on six continents.

"GM leads in the U.S. and China, the two most important auto markets in the world," said Akerson. "We are also in the midst of the most aggressive product rollout in our history. Tim is critical to building on our success in China and to ensuring flawless vehicle launches around the globe."

Globally, GM will launch more than 60 vehicles in 2013-14. Lee's leadership has contributed to several significant quality accolades for GM, including the most awards of any automaker in the 2013 J.D. Power and Associates Initial Quality Survey and Chevrolet Impala's rating by a leading consumer publication as the best large sedan in America.

About General Motors Co.
General Motors Co. (NYSE:GM, TSX: GMM) and its partners produce vehicles in 30 countries, and the company has leadership positions in the world's largest and fastest-growing automotive markets. GM, its subsidiaries and joint venture entities sell vehicles under the Chevrolet, Cadillac, Baojun, Buick, GMC, Holden, Isuzu, Jiefang, Opel, Vauxhall and Wuling brands. More information on the company and its subsidiaries, including OnStar, a global leader in vehicle safety, security and information services, can be found at http://www.gm.com.
# # #