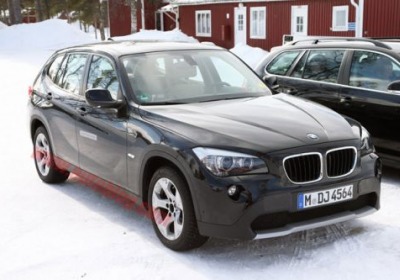 So here's something interesting. This might look like an ordinary BMW X1, but take a closer glance – those stickers on the side read "hybrid test vehicle," and around back, there doesn't appear to be a tailpipe at all. But does this mean that BMW is working on a straight-up all-electric version of its smallest crossover? Let's hypothesize for a moment.

Just because we can't see a tailpipe in these photographs doesn't mean there isn't one somewhere under there. And while those hybrid stickers are an indication that there's some sort of electrification going on underhood, it could just be for a forthcoming gasoline-electric version of the X1. Lexus recently confirmed it would be bringing a small hybrid CUV to market that will compete in the X1's space, so perhaps BMW is working on another powertrain option to offer when its littlest crossover gets refreshed.

Also consider that Toyota collaborated with Tesla to bring back the RAV4 EV, which would sort of compete with the X1, so it also stands to reason that perhaps this is an early test mule for a larger all-electric vehicle in the upcoming, eco-minded BMW i range. Our spies seem pretty confident that the prototype seen here is indeed an all-out EV, but we just can't say with certainty without more evidence.

Look through the shots in our high-resolution gallery above and give us your best guess in the comments.