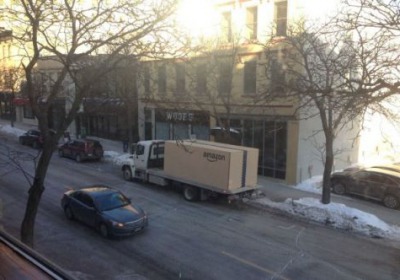 Back in September, reports started rolling in that Amazon would get into the auto sales business after a promo for the Nissan Versa Note appeared on the online retailer's page. That link didn't actually sell a car, but instead acted as a referral service for potential customers, linking them up with dealers. A recent image that's been floating around on Reddit and that was picked up by The Huffington Post, though, has us wondering if Amazon has dove into the actual business of selling cars, rather than just referring people to dealers.

The image, above, shows an enormous Amazon box on the back of a flatbed tow truck. According to HuffPo, this could be one of the cars sold through the earlier promotion for the Versa Note (which was sweetened with the addition a $1,000 Amazon gift card). Apparently, three of the Versas purchased would arrive in such a fashion. Then again, this could all be nothing more than an elaborate publicity stunt. Amazon is, after all, the company has been touting drone delivery of its goods.

What do you think is in the box? Let us know down in Comments. Bonus points for those that come up with an idea as absurd as the bulk order of banana slicers HuffPo mentioned.