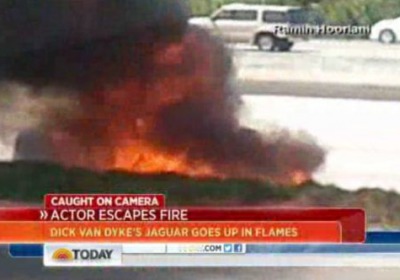 Actor Dick Van Dyke was caught in a dangerous situation on a Los Angeles highway (who are we kidding, every situation on an LA highway is dangerous), when his Jaguar XJ spontaneously caught fire. The 87-year-old actor/comedian pulled to the side and attempted to call emergency services when another motorist pulled him from the car. There seems to be some confusion as to whether Van Dyke was passed out or merely calling emergency services.

According to the photos and video from NBC and The Today Show, the car was thoroughly cooked in the blaze and is now a total loss. After the incident, Van Dyke's wife, Arlene, posted that the actor was "fine," sharing a Vine video of the star, the car, and a few CHP troopers that were on hand. Later in the day, Van Dyke tweeted a photo of his toasted sedan, saying, "Used Jag for sale REAL CHEAP!!"

You can view the Today show segment on the incident as well as Arlene Van Dyke's Vine video, below.


Visit NBCNews.com for breaking news, world news, and news about the economy