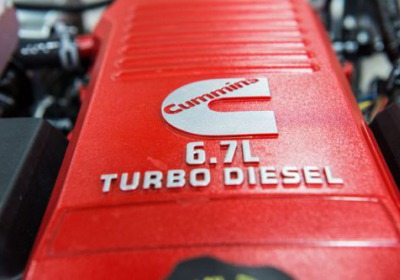 Ahead of a new Ram Heavy Duty that will debut sometime next year (check out the spy shots below), Chrysler and Cummins are celebrating a milestone in a 24-year partnership that has supplied the Ram pickup with diesel engines.

In its early years, the Cummins straight-six turbo diesel was rated at just 160 horsepower and 400 pound-feet of torque, and its clattering 12 valves could be heard from a mile away. Its most recent configuration still uses a straight-six layout, but displacement grew to 6.7 liters in 2007 allowing the engine to now produce up to 385 hp and a whopping 850 lb-ft of torque. While a rumored smaller Cummins engine for use in the light-duty Ram 1500 never materialized, the work-ready 6.7-liter Cummins turbo diesel accounts for 80 percent of all Ram HD sales.

Chrysler has not yet announced when and where this two-millionth engine will be on display, but you can read more about the engine and the partnership in the press release below.

The 350-horsepower, 6.7-liter, in-line 6-cylinder turbo diesel is distinguished by its "Cummins Red" rocker cover and breather. But despite its 800 lb.-ft. peak torque rating, the historic engine – feted today at a Cummins plant in Columbus, Ind. – will not see service. Instead, it will go on display, touring the U.S.

"The Ram Truck-Cummins diesel partnership is one of the industry's most enduring and certainly fitting of such a tribute," says Fred Diaz, President and CEO – Ram Truck Brand and Chrysler de Mexico. "Both companies have benefited greatly, but Ram diesel customers are the real beneficiaries. Every day they experience the toughness and capability a Cummins-powered Ram can deliver."

"I am immensely proud of our association with Cummins," says Bob Lee, Chrysler Group Vice President and Head of Engine and Electrified Propulsion Engineering. "And I have no qualms matching our truck diesels against those of any competitor for performance and durability."

For 2013, Cummins-powered Rams boast capabilities and features that include:

The Chrysler Group-Cummins partnership traces its beginnings to 1985, when development work began on a 5.9-liter 12-valve in-line 6-cylinder turbo diesel. When it launched in 1989, it was rated at 160 horsepower and 400 lb.-ft. of peak torque – less than half the numbers for today's High-Output 6.7-liter Cummins turbo diesel.

In the 2013 Ram Heavy Duty pickups, the top-line Cummins engine makes 385 horsepower and a best-in-class 850 lb. ft. of torque.

Among other notable events in the evolution of Cummins diesels produced for Chrysler Group:

Take-rate is testament to the appeal of Cummins engines among Ram customers. Diesels account for nearly 80 percent of Ram Heavy Duty sales.

About Ram Truck Brand
The Ram Truck brand continues to establish its own identity and clearly define its customer since its launch as a standalone vehicle brand. Creating a distinct brand for Ram trucks has allowed the brand to concentrate on how core customers use their trucks and what new features they'd like to see. Whether focusing on a family that uses its half-ton truck day in and day out, a hard-working Ram Heavy Duty owner or a business that depends on its commercial vehicles every day, Ram has the truck market covered.

Chrysler Group LLC Corporate Overview
Chrysler Group LLC, formed in 2009 to establish a global strategic alliance with Fiat S.p.A., produces Chrysler, Jeep, Dodge, Ram, Mopar, SRT and Fiat vehicles and products. With the resources, technology and worldwide distribution network required to compete on a global scale, the alliance builds on Chrysler Group's culture of innovation, first established by Walter P. Chrysler in 1925, and Fiat's complementary technology that dates back to its founding in 1899.