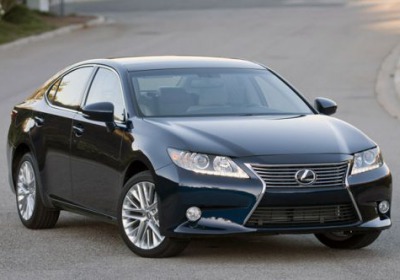 The ES is Lexus' top-selling sedan, but the Japanese luxury marque has never manufactured it outside of Japan. In fact, Lexus has never made any cars in the United States, one of its largest markets worldwide. But that's about to change.

Yesterday, construction began in Georgetown, Kentucky, on the first Lexus assembly line in America, the first concrete (or steel) step in a $360-million expansion of Toyota's plant in the Bluegrass state that will create 750 new jobs. The expansion was announced last April by chief executive Akio Toyoda at the New York Auto Show.

Once the new assembly line gets online in the fall of next year, Toyota plans on building some 50,000 units of the ES each year. Lexus sold a record 72,581 examples of the ES in the United States last year – 30 percent more than the previous year – so Lexus will either have to import some more from overseas or leave some buyers disappointed.

Toyota Motor Manufacturing Kentucky (TMMK) also builds the Camry, Avalon and Venza, with a capacity to assembly 500,000 vehicles and 600,000 engines each year.

Last April's announcement to localize production of the ES 350, which has never been assembled outside Japan, aligns with Toyota's continuing strategy to assemble vehicles in the markets where its customers live. The ES is Lexus' bestselling sedan, with 72,581 units sold in the U.S. in 2013, up nearly 30 percent from 2012.

Localizing production of the luxury sedan will generate 750 new jobs in the Bluegrass. Additionally, Toyota is investing $360 million in its Kentucky plant, the company's largest and most experienced manufacturing operation in North America. Production of the ES 350 is set to begin in the fall of 2015, with plans to assemble approximately 50,000 units in Georgetown annually.

"Today's milestone is symbolic of the bright future that lies ahead of us," said Wil James, president of Toyota's Kentucky plant. "We're proud of our long history of building world-class vehicles in the Bluegrass, and look forward to raising the bar once again by adding Lexus to our lineup of Kentucky-made products."
About Toyota Motor Manufacturing, Kentucky, Inc.
Toyota's largest plant in North America, Toyota Motor Manufacturing, Kentucky, Inc. (TMMK) started production in May 1988. The Georgetown, Ky. plant employs approximately 6,600 full time team members and represents a $6 billion investment. TMMK currently produces the Camry, Camry Hybrid, Avalon, Avalon Hybrid and Venza as well as four-cylinder and V-6 engines and other engine components. Annual capacity is 500,000 vehicles and 600,000 engines. Since 1987, TMMK has donated more than $44 million to non-profit organizations throughout Kentucky. www.toyotageorgetown.com

See also: Lexus RC F Coupe puts on a brave face for Detroit, Are you the 2015 Lexus RC F?, BMW-Toyota joint sports car project is on like Donkey Kong.