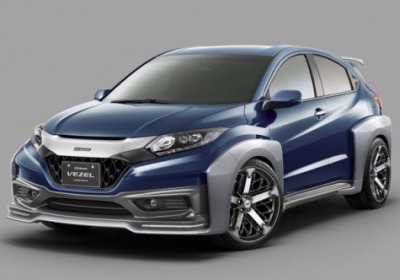 Japanese automakers and their tuning divisions have descended upon the Makuhari Messe in Chiba City for the 2014 Tokyo Auto Salon. And for Honda, it's all about Mugen.

Honda's Japanese Domestic Market tuning division brought a series of modified concepts and racing cars to the salon this year, including the CR-Z hybrid touring car it fields in the Super GT series, the SF13 single-seater from the Super Formula series as well as customized versions of the Fit, Odyssey and N-WGN. But the prize for the most outrageous of them all surely goes to the modified Vezel you see above.

Modeled on Honda's new Fit-based crossover, the Mugen Vezel Concept goes further than the versions we've seen until now. It features a bonkers body kit, dual exhaust, brake upgrade, sport suspension, intricate 20-inch alloy wheels and an upgraded interior. It's not for the faint of heart, but if you're feeling still interested, you can check it out in the gallery above, along with the announcement below and the specs on Mugen's website.

Our concept this year is "MUGEN POWER 2014." MUGEN will express a wide range of MUGEN activities by displaying the SUPER GT and SUPER FORMULA series championship machines, a concept car, and models equipped with MUGEN parts at the Honda booth.

We will debut our concept car ("MUGEN VEZEL CONCEPT") based on the Honda VEZEL introduced to the Japanese market in December 2013.

In addition to the racing machines and the concept model, models equipped with MUGEN parts and based on the VEZEL, FIT RS, ODYSSEY ABSOLUTE, and N-WGN Custom will be displayed.