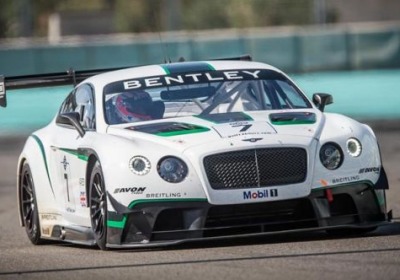 For a company with a tendency to name its cars after parts of the Circuit de la Sarthe like Arnage and Mulsanne, Bentley sure has been gone from endurance sportscar racing for a long time. It famously won the 24 Hours of Le Mans five times in the 1920s, but didn't come back until 68 years later to win again in 2003. That was the last time Bentley competed on the world stage... until now.

Bentley first revealed its rekindled racing ambitions with the Continental GT3 at the 2012 Paris Motor Show. The car would be developed for privateer racers, and that's all led up to this point. Team M-Sport, which you may know better for having run Ford's World Rally Championship team, was charged with developing the car, and it entered the new racecar this past weekend in the Gulf 12 Hours in Abu Dhabi. There, on the Yas Marina Circuit in the United Arab Emirates, the Continental GT3 diced it with GT3 versions of the likes of the Ferrari 458, Mercedes-Benz SLS AMG and McLaren 12C.

So how did it fare on its first time out? Well the race is split into two six-hour sessions, and the Conti finished third in the first heat (behind the AF Corse Ferrari and Black Falcon Benz) and fourth in the second (just edged out by another 458 entered by Kessel Racing). Not a bad outcome for Bentley's first race in a decade. And the Abu Dhabi race was essentially a dress rehearsal for next season when the Continental GT3 will be entered in the full 2014 Blancpain Endurance Series.

New Bentley Boys Steven Kane, Guy Smith and Andy Meyrick have driven two stints each so far, with Steven starting the race and Andy taking the six-hour chequered flag. Close battles with the Kessel Racing Ferrari and Gulf Racing McLaren have challenged the drivers, but all have driven with great skill and confidence in the new race package.

Bentley's Director of Motorsport, Brian Gush, comments: "Six hours in and we're very pleased with the result so far. Finishing the first half of the race in third position is testament to the hard work of the team and we're now focussed on getting the car ready for the night race, which holds a totally different set of challenges as the track temperature drops."

The second half of the Gulf 12 Hours starts at 17:45 local time (13:45 GMT). Live updates can be accessed by following @BentleyComms on Twitter.

(Abu Dhabi, 13th December 2013) Bentley's test race debut of the all-new Continental GT3 racecar with Team M-Sport achieved an impressive fourth place finish in the Gulf 12 Hours of Abu Dhabi. After completing the first six hour session of the race in third position, the second half of the race saw the team maintain that position until the final two hours, when a close fight with the Ferrari 458 GT3 of Kessel Racing was ultimately won by the more established car. The closing minutes were not without drama, with apparent damage to the underfloor, meaning a cruise to the finish line to bring the car home.

Bentley's Director of Motorsport, Brian Gush, comments: "In running an all-new car for the first time, our main goal today was to finish the race and be consistent. We've achieved this, and then to finish fourth in a race with such established competition is extremely encouraging. We leave Abu Dhabi with confidence that we will have a reliable and competitive package for 2014, when the hard work really starts."

With the car running really well throughout the 12 hour event, the team is delighted with the endurance reliability. Equally impressive is the performance of the three new Bentley Boys that each drove four hour-long stints in the desert heat. The trio of British racers in Guy Smith, Steven Kane and Andy Meyrick was delighted with the performance of the car in its first event. Guy Smith, racing a Bentley for the first time since the Le Mans win of 2003, comments: "Today has been amazing. All three of us found that we could really push the car to the limit, and when we realised we were on for a good result it encouraged us to really test its abilities. It's given us a lot to look forward to in the Blancpain series next year."

The team will now analyse the huge amount of data collected over the course of the race, and continue to develop the car in preparation for a full season of racing in the 2014 Blancpain Endurance Series, beginning at Monza on 12th April.