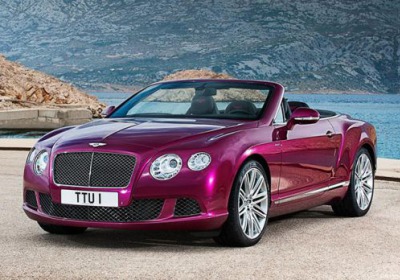 It was Indiana Jones and that whole ark episode that gave us the best example of what happens after leaks: once you break the seal, all hell breaks loose and there's no way you're putting it back. We aren't sure who lifted the lid, but official photos of the 2013 Bentley Continental GT Speed Convertible showed up on Flickr last week, and so here we are presenting them to you.

If it follows the Bentley playbook as the last GT Speed – and we have no reason to believe it won't – beyond the lack of a top there won't be much difference between it and the coupe than a few minor numerals. There will be a W12 in front with 616 horsepower and 590 foot-pounds of torque running through an eight-speed transmission, and the dash from standstill to 60 miles per hour will clock in somewhere around four seconds. That's some 21-inch rolling stock setting up the stance, and unless it's gotten slower than the last GT Speed, ultimate velocity with the top up should be at least 200 mph.

It will be undeniably fast. As for the paint, you can make up your own minds about that while you peep its angles in the high-res gallery. We'll find out the rest when the world's purplest droptop is revealed at the Detroit Auto Show.