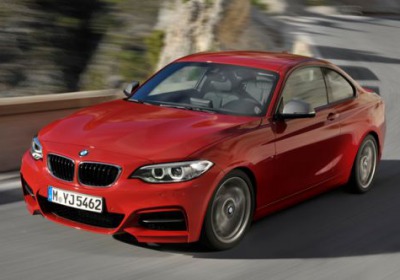 BMW is definitely going to have its hands full at next month's Detroit Auto Show. The big news might be the debut of the M3 and M4, which were previewed in our Deep Dive, but joining those performance cars under the bright lights will be the all-new 2015 BMW 2 Series Coupe.

While we already know most of the details about the 2 Series and its available M Performance parts, BMW has now announced that the Coupe will go on sale in the first quarter of next year with a starting price of $33,025 (*plus $925 for destination) for the base 228i. This price is about $1,500 more than the current 1 Series Coupe, which starts at $31,500, while the M235i's starting price of $44,025 is almost $500 more than the existing 135is Coupe. There is still no indication as to when we'll see 2 Series Convertible unveiled.

In addition to new M cars and the 2 Series, BMW's display will also reveal another new color-theme package for the Z4. Last year we saw the Hyper Orange package, and this year will give us the Ivory White Burnt Sienna Z4 available in an exclusive Sparkling Brown Metallic exterior paint color. Scroll down for the full press release of production vehicles BMW has planned to showcase at Detroit's Cobo Hall next month.

Additional Featured BMW Vehicles to Include: BMW i3, BMW i8, BMW X1 and the BMW Z4 in Ivory White Burnt Sienna

The BMW 2 Series Coupe, an entirely new model series and successor to the 1 Series Coupe, as well as the BMW M3 Sedan and BMW M4 Coupe, the latest chapter in the history of high-performance sports cars from BMW M, will make their world debuts at the 2014 North American International Auto Show on Monday, January 13, at the BMW Stand at COBO Center, One Washington Boulevard Detroit, MI 48226. English and Spanish speaking BMW representatives will be available for interviews throughout the day. In addition, BMW will feature the all-electric BMW i3, the plug-in hybrid sports car BMW i8, BMW X1, and the BMW Z4 in Ivory White Burnt Sienna.

Continuing the decades-long tradition of premium, compact Coupes with impeccable driving dynamics, the all-new BMW 2 Series Coupe is designed with significantly larger dimensions than its predecessor, the BMW 1 Series Coupe, and will be offered as both a 228i and M235i, which is the first BMW M Performance Automobile to be offered in the US. The BMW 2 Series Coupe has unmistakable BMW handling attributes and impressive ride comfort thanks to rear-wheel drive, longitudinally mounted engines, near-perfect 50-50 weight distribution, and sophisticated chassis technology. Double-pivot spring strut front suspension and five-link rear suspension feature tuning tailored to each 2 Series model, while variable sport steering, M Sport braking system and Adaptive M suspension with electronically controlled shock absorbers are all standard on the M235i in the US and optional on the 228i. Dynamic Stability Control system including Dynamic Traction Control with an electronic locking function for the rear axle is standard; M Performance mechanical limited slip differential will be available for the BMW M235i Coupe through the BMW M Performance Accessories range. The 2014 BMW 2 Series Coupe will launch in the US in 2014 Q1 with a base MSRP of $33,025 for the 228i and $44,025 for the M235i, including $925 Destination and Handling fee. BMW 2 Series Coupe Press Kit

Making world debuts together in Detroit, the all-new BMW M3 Sedan and first-ever BMW M4 Coupe are examples of the legendary BMW M engineering discipline which emphasizes a synthesis of motorsport technology with unrestricted daily driving versatility. World-class engine and powertrain technologies, along with intelligent lightweight vehicle construction through extensive use of exotic construction materials, add to the intensity of the M feeling and driving experience. The extensive weight-reduction efforts of the BMW M engineers should not be underlooked; the new BMW M3 and BMW M4 are the first BMW M cars to see a reduction in curb weight from one generation to the next. Both models are equipped with an all-new 3.0-liter inline-6 engine with M TwinPower Turbo technology and increased performance levels that distinguish them from previous generations of the M3 family, delivering 425 horsepower and 406 lb-ft of torque. Both the M3 Sedan and M4 Coupe accelerate from 0 to 60 mph in 3.9 seconds when equipped with the optional M-DCT transmission. By setting new segment standards in terms of dynamics, agility, precise handling and emotional design, the new BMW M3 Sedan and BMW M4 Coupe have set the benchmark for the high-performance segment created by the M3 many years ago. BMW M3 and M4 Press Kit

The BMW i3 is the first fully electric vehicle from BMW Group under BMW i's growing lineup of visionary concept vehicles constructed from the ground up primarily from lightweight carbon fiber. With a hybrid-synchronous electric motor delivering170 horsepower and 184 lb-ft of torque, the BMW i3 is electrified by a 22-kWh lithium-ion battery good for 80-100 miles of emission-free driving. The BMW i3 will offer interior space comparable to the legendary BMW 3 Series on a shorter overall body. Its low 32.3-foot turning circle and a relatively long wheelbase make it agile and engaging to drive, ideally suited to driving in dense urban areas. As perhaps the most sustainably-manufactured passenger car in the world, the story of the i3's production process is equally compelling. Available in 2014 Q2, the BMW i3 will have a base MSRP of $41,350 and the range-extender model will have a starting MSRP of $45,200 (excludes Destination & Handling fee). BMW i3 Press Kit

The BMW i8 is the first plug-in hybrid 2+2 sports car from BMW Group. It will join BMW i's growing lineup of visionary vehicles which are purpose built from the ground up as electric and hybrid electric and constructed primarily from lightweight carbon fiber through sustainable processes. Coming to the market in 2014 Q2 and priced at $135,700 (excludes Destination & Handling fee), the BMW i8 features an award-winning design with sleek, low slung looks and operates with extremely low fuel consumption (est. up to 94 mpg) and emissions output. It is capable of accelerating from 0 to 60 mph in 4.4 seconds on the way to an electronically-governed top speed of 155 mph. BMW i8 Press Kit

With new further refinement inside and out, the BMW X1 will continue to affirm its position as The Ultimate Driving Machine in its segment. In the spring of 2014, the compact BMW X1 is raising the standard for this segment with eye-catching exterior accents, a further-refined interior ambience and innovative equipment features. The BMW X1 is currently available at an MSRP of $31,545 (including $895 Destination and Handling).

Classic BMW Roadster proportions, sophisticated engine and drivetrain technology, and innovative equipment features highlight the character of the BMW Z4. The new equipment package known as Ivory White Burnt Sienna refines the interior of the BMW Z4 to intensify the character of the car, adding further aesthetic appeal to the open-top experience. The various exclusive colors and materials are available expressions of sporty luxury and are embellished with precision seams, surfaces, and stitching that bring harmony to the design of the interior. The package includes extended premium Nappa leather trim, specially finished sport seats in Ivory White with contrasting brown stitching that highlights the perforated surface of the contoured side supports in the seat backs. For the first time, as an exclusive touch and only in combination with the Ivory White Burnt Sienna package, the BMW Z4 can be ordered with Sparking Brown Metallic paint finish.