Audi reveals driver lineup and livery for Rolex 24 at Daytona 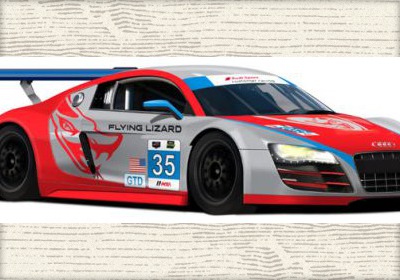 Audi has announced driver lineups for its customer teams running the R8 LMS GTD in this year's Rolex 24 at Daytona. The Rolex 24 is the first event for the inaugural season of the new United SportsCar Championship series, which merges the old Grand-Am Series with the American Le Mans Series. The new series kicks off January 25.

Flying Lizard Motorsports, which has traditionally been known for repping the Porsche 911, will campaign a pair of R8 coupes, while GMG Racing, Paul Miller Racing and Fall-Line Motorsports will run one car each. A number of drivers on each team are Audi Sport factory drivers, hot shoes like Oliver Jarvis for Fall-Line and Filipe Albuquerque and Dion von Moltke for Flying Lizard, while there are also a few Audi Sport customer drivers.

"We have a fantastic group of racing partners and drivers this season and look forward to defending last year's Daytona win," said president of Audi of America, Scott Keogh. "The successes of the R8 in endurance racing are a testament to the engineering found in every Audi on the road today."

Besides the driver lineups, which you can view below, Audi has also taken the opportunity to reveal the liveries for both Flying Lizard entries as well as the GMG Racing car. We have a press release with the full driver rosters below, while you can view the livery renderings up above.

Today, Audi Sport customer-racing announces its GTD driver line-up for the Rolex 24 hour race at Daytona International Speedway. Testing and preparations began in November and will continue at the Roar Before January 3, 2014, when all of the teams and drivers will be present ahead of the legendary race that will take place on January 25-26, 2014.

"We have a fantastic group of racing partners and drivers this season and look forward to defending last year's Daytona win," said Scott Keogh, President, Audi of America. "The successes of the R8 in endurance racing are a testament to the engineering found in every Audi on the road today."

In only its second running at the legendary race, an Audi R8 race car was the first to cross the finish line at last year's Rolex 24 at Daytona. The teams and drivers will look to make history once again on January 25-26 as the TUDOR United SportsCar Championship makes it race debut. Audi Sport customer racing will support the teams for the race including Audi Sport factory and Audi Sport customer racing drivers. The drivers for each team are listed below:


Fall-Line Motorsports returns after running half of last year's GRAND-AM series, Flying Lizard as well as Paul Miller Racing will make their race debuts in the R8 LMS after successful race results with Porsche. GMG Racing will also enter the Rolex 24 at Daytona following a successful campaign last year in the Pirelli World Challenge in which James Sofronas placed 2nd in the driver championship. Audi Sport factory drivers and Audi Sport customer racing drivers will augment each of the teams for the TUDOR United SportsCar premiere race.

Fall-Line Motorsports which began racing the Audi R8 GRAND-AM midway through last year's GRAND-AM season will return to the grid this year with considerable experience having been gleaned about the car. Charlie Putnam and Charles Espenlaub will be joined by James Walker who won the WEC Silverstone race as well as Oliver Jarvis, Audi Sport factory driver, who was on last year's Daytona-winning team.

Flying Lizard Motorsports has had great success winning multiple races and championships in ALMS and gained invaluable experience competing at the Le Mans 24 Hours as well as in GRAND-AM. Two Audi R8 LMS vehicles will be carrying the Flying Lizard livery. Driver and team owner Seth Neiman will pilot the #35 R8 LMS and will be joined by Alessandro Latif, Dion von Moltke and Filipe Albuquerque (Audi Sport factory driver). Dion and Filipe were both part of the winning team to be first to the checkered flag at last years' race. The second Audi R8 LMS (#45) will be driven by Nelson Canache Jr., Tim Pappas, Spencer Pumpelly and Markus Winkelhock (Audi Sport customer racing driver).

GMG Racing, following a successful campaign in last year's Pirelli World Challenge series, will be running the #32 R8 LMS for Rolex 24 at Daytona. Owner, Alex Welch will be joined by James Sofronas who took second place in the drivers championship of the Pirelli World Challenge. Audi Sport customer racing drivers Frank Stippler who came in the third place in last year's race and Marc Basseng will join the team as they strive for success in the new TUDOR United SportsCar Championship.

Paul Miller Racing will make its race debut in an Audi R8 LMS but is no stranger to the Audi brand. As owner of Audi of Parsippany in New Jersey, Paul Miller has been a great contributor to the success of selling and servicing Audi vehicles for many years. The team brings a wealth of experience to the campaign that includes the return of Bryce Miller, Paul Miller's son, who has shown very promising results and will look to expand upon those going forward. Matt Bell, Christopher Haase (Audi Sport customer racing driver) and Rene Rast (Audi Sport customer racing driver) will round out the team for the Rolex 24 at Daytona.

Audi of America, Inc. and its U.S. dealers offer a full line of German-engineered luxury vehicles. AUDI AG is among the most successful luxury automotive brands globally. Audi was a top-performing luxury brand in Europe during 2012, and broke all-time company sales records in the U.S. Through 2016, AUDI AG will invest about $17 billion on new products, facilities and technologies. Visit www.audiusa.com or www.audiusanews.com for more information regarding Audi vehicles and business topics.