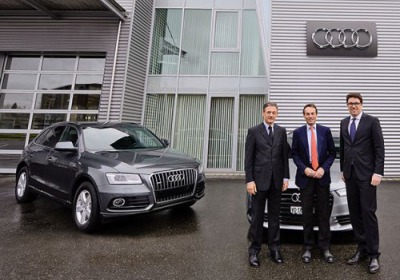 The automotive sponsor of the International Olympic Committee for the past 22 years has been Daimler-Benz. No more, as Audi has just signed a four-year deal to be the official auto supplier to the folks who keep the torch alight and on the move. Audi will supply vehicles for the IOC's headquarters in Lausanne, Switzerland and the organization's international events.

In case you're remembering all the stories about BMW and the London Olympics last summer and wondering where Mercedes-Benz was in all of that, the answer lies in the numerous mouths at the Olympic trough. The IOC is the organization and oversight body of the Olympics – much like the way the FIA oversees world motorsport. BMW, though, sponsored the London Organizing Committee for the Olympic Games, so during the games IOC reps rode in Benzes, LOCOG and its guest dignitaries rode in BMWs.

The Volkswagen Group has other ties with the Olympics as well: The Group will be the official vehicle partner for the winter Olympics in Sochi, Russia in 2014, and Audi currently partners the national Olympic federations of Germany, Finland, Russia and Switzerland. The press release below announcing the partnership has all the official details.

Audi is new automobile supplier of the IOC

Ingolstadt, 2013-01-08 -- Five rings are now driving four rings: Effective immediately, Audi is the new automobile supplier of the International Olympic Committee, equipping the organization's fleet in Lausanne plus international IOC events with Audi models. In addition, there are plans to jointly develop projects, for instance in the area of Corporate Responsibility, within the scope of the suppliership.
The Volkswagen Group has supported the Olympic Games at various levels for a long time. The Group was the official vehicle partner of the Beijing 2008 Olympic Games and will again assume this role in 2014 at the Olympic Winter Games in Sochi. Furthermore, Audi is a partner of the National Olympic Committees in Germany, Finland, Russia and Switzerland. "Through our cooperation with the IOC as the top-level global organization we aim to link our brand even closer with international sport," says Luca de Meo, member of the Board of Management of AUDI AG for Marketing and Sales. "We're going to shape many exciting joint projects in the future."

The suppliership commenced on January 1, 2013 and will initially be in effect until the end of 2016 under the terms of the agreement. Audi is providing more than 40 cars to the IOC in Lausanne featuring a mix from Audi's entire model range, from the Audi A1 through to the Audi A8L, plus the Audi Q5 hybrid and A8 hybrid. In addition, Audi will supply automobiles in support of international events such as the IOC session to be held in Buenos Aires in September.

IOC Director General, Christophe de Kepper, says,"The IOC is delighted to have Audi, a world renowned company, as its official automobile supplier and we look forward to developing further social responsibility initiatives with them in the near future as part of this agreement."

Additional projects are being planned as part of the cooperation. Aside from the IOC, Audi's partners include the Fédération Internationale de Ski (FIS) and 15 alpine national teams. Socio-political ideas are to be initiated in collaboration with all major sporting associations. In this context, Audi views the topic of Corporate Responsibility and the role of sport in culture and society as a particularly important strategic pillar for the future.