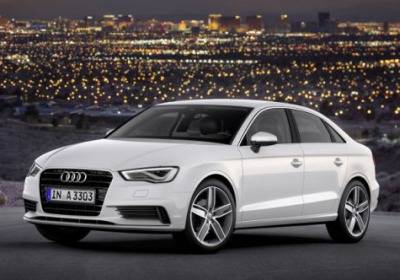 Audi has made a big splash at this year's Consumer Electronics Show, joining the Open Automotive Alliance with Google, Honda, Hyundai, General Motors and NVIDIA, debuting a next-generation cockpit that's destined for the third-generation Audi TT and promising to offer laser headlights in a production car. But much like Apple during the Steve Jobs days, it has "just one more thing."

The German luxury brand has announced that it will, like Chevrolet, be teaming with AT&T to offer 4G LTE connectivity in its vehicles. The first model to benefit will be the 2015 Audi A3.

"With the introduction of the new A3 family Audi is putting the most advanced technology into the compact luxury segment," said Scott Keogh, President, Audi of America in a press release. "Offering drivers a 4G LTE connection will provide the fastest in-vehicle connection available and significantly enhance the infotainment experience."

For A3 buyers, running the car's data plan should also be easier, as Audi will be the first brand to offer a Mobile Share data plan that will allow any AT&T customers to link their vehicle to a current data plan. Following the A3, the rest of the Audi range is slated to get 4G LTE as vehicles are refreshed.

Scroll down for the official press release from Audi and AT&T.

Audi of America today unveiled a new partnership with AT&T offering U.S. Audi drivers the expected first-ever in-vehicle 4G LTE data connection with the introduction of the 2015 A3 family. The announcement was made today at the 2014 Consumer Electronics Show.

"With the introduction of the new A3 family Audi is putting the most advanced technology into the compact luxury segment," said Scott Keogh, President, Audi of America. "Offering drivers a 4G LTE connection will provide the fastest in-vehicle connection available and significantly enhance the infotainment experience."

"AT&T has the nation's fastest and most reliable LTE network* and this new relationship with Audi allows us to drastically improve the in-car experience," said Glenn Lurie, President, AT&T Emerging Enterprises and Partnerships Organization. "It's exciting to think about the Audi A3 family of cars throughout the U.S. running 4G LTE-powered wireless hotspots and more through Audi connect."

Audi will add convenience by becoming the first automaker to offer a Mobile Share data plan option to AT&T wireless customers who would like to add their vehicle to their existing smartphone or tablet data plan.

AT&T has been an industry leader in telematics and related applications development, offering a range of connectivity and services for cars manufactured by a variety of global automotive makers. For more than a decade, AT&T has provided world-class connected and M2M device support and professional services to many of the world's largest device manufacturers and global exporters of wireless-enabled equipment. AT&T was also the first to enter the market with a proprietary, single global SIM platform enabling automotive, consumer and M2M equipment makers the ability to work through a single carrier to wirelessly enable and connect products.

Audi plans to roll out 4G LTE capability across its entire lineup as new or refreshed models come to the market. AT&T has the fastest and now most reliable 4G LTE network.* And AT&T was named America's fastest 4G LTE network in PC Magazine's 2013 Fastest Mobile Networks 30-market study – and also swept the top rankings in all six U.S. regions from coast to coast: Northeast, Southeast, North-Central, South-Central, Northwest and Southwest.

The new A3 family will feature the most advanced version of Audi connect including picture navigation, read-aloud news headlines, Facebook and Twitter alerts; access to more than 7,000 Web radio stations; personalized RSS news feeds, and more.

An accompanying mobile app will allow advanced functionality between the MMI system and smartphones, reducing the need for Audi motorists to handle their devices when accessing some smartphone-based features.

ABOUT AUDI
Audi of America, Inc. and its U.S. dealers offer a full line of German-engineered luxury vehicles. AUDI AG is among the most successful luxury automotive brands globally. Audi was a top-performing luxury brand in Europe during 2012, and broke all-time company sales records in the U.S. Through 2016, AUDI AG will invest about $17 billion on new products, facilities and technologies. Visit www.audiusa.com or www.audiusanews.com for more information regarding Audi vehicles and business topics.

About AT&T
AT&T Inc. (NYSE:T) is a premier communications holding company and one of the most honored companies in the world. Its subsidiaries and affiliates – AT&T operating companies – are the providers of AT&T services in the United States and internationally. With a powerful array of network resources that includes the nation's fastest and most reliable 4G LTE network, AT&T is a leading provider of wireless, Wi-Fi, high speed Internet, voice and cloud-based services. A leader in mobile Internet, AT&T also offers the best wireless coverage worldwide of any U.S. carrier, offering the most wireless phones that work in the most countries. It also offers advanced TV service with the AT&T U-verse® brand. The company's suite of IP-based business communications services is one of the most advanced in the world.

Additional information about AT&T Inc. and the products and services provided by AT&T subsidiaries and affiliates is available at http://www.att.com/aboutus or follow our news on Twitter at @ATT, on Facebook at http://www.facebook.com/att and YouTube at http://www.youtube.com/att.