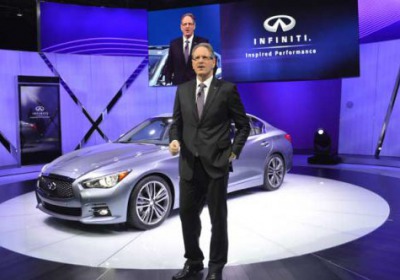 "It took us 25 years to bring Audi back in the US. This kind of thing takes a long time."

When Johan De Nysschen left his post at Audi of America last year to take the seemingly thankless job of leading Infiniti's global operations, it seemed like a familiar scenario. Like Michael Dukakis going from one of two men that could have won the White House to teaching political science at an obscure Florida college.

De Nysschen was a key architect in rebuilding Audi in the US, from a punchline about "sudden acceleration" in the 1980s, to being a truly hot brand and legitimately vying with BMW and Mercedes-Benz for one-percenters' German car bucks. In talking about his task at Infiniti with me, he repeated a line that I wonder if he mentioned to Nissan-Renault honcho Carlos Ghosn at the hiring meeting: "It took us 25 years to bring Audi back in the US. This kind of thing takes a long time."

What's he up to? On the surface, Nissan has made a few moves to get Infiniti its own identity within the company. The organization moved from Tokyo to Hong Kong and registered a new company ID: The Infiniti Global Ltd. When he got there, he said, "The cupboard was emptier than I knew." So De Nysschen is also directing the new product plan, as well as asking ad agency TBWA/Chiat Day to put together a walled-off agency for his brand, rather than having the agency divide teams for both Nissan and Infiniti.

Nissan has made moves to get Infiniti its own identity within the company.

On the hardware front, Infiniti will employ a high-performance four-cylinder engine from Daimler by way of an alliance between Nissan-Renault and the German automaker. And it will also get a vehicle platform from Daimler that Infiniti and Nissan are co-developing – an arrangement that is similar to the alliance Volkswagen has with Porsche for the Cayenne and Touareg.

What did he tell Ghosn was his recipe for fixing the 23-year-old brand? "We have to have our own powertrains, our own designs, our own identity. You can't run a premium brand like you run a mass-market brand." His goal before he packs it in? "To be accepted into the club of global luxury car brands."

Sales target? Fasten your seat belt. Though Infiniti sold fewer than 200,000 globally in 2012, the former Audi US chief says he plans to reach 500,000 sales by 2017. Granted, he says, a big chunk of that will come from China. Still, we are reminded of what the kidnapper told Liam Neeson in Taken when he warned the bad guy not take his daughter: "Good luck."

Infiniti's global ambitions are just that. More than half the company's sales are in the US, though it is sold in 15 countries with just 230 dealers. There has been a long established pattern of cars that are sold as up-market Nissans in Japan sold as Infinitis elsewhere.

One of the first marketing measures De Nysschen tackled was model naming. He has ditched the haphazard nomenclature of the G, M, J and FX for a new system going forward, whereby all sedans and coupes will be called Q – as in the new Q50, which is the updated G37. All crossovers and SUVs wil be called QX followed by a double digit number.

He has ditched the haphazard nomenclature of the G, M, J and FX for a new system going forward.

Ironically, back in the 1990s, De Nysschen had to meet with Infiniti officials to discuss a beef over model naming because Infiniti had the Q prefix, and Audi wanted to use it for what became the Q3, Q5, Q7, etc. The compromise was that Audi would have to stop at Q9, and Infiniti, he says, will use Q and QX followed by double-digit numbers.

Yeah... that ought to be clear to everyone.

So, Infiniti has had one consistently praised model, the G, which is also the only model prefix with any name recognition associated with Infiniti. And he scrapped it as first order of business?

Lest we think De Nysschen is a bit mad or a masochist, we should remember that Liam Neeson did actually get his daughter back in Taken after killing, like, a hundred Albanian bad guys, and suffering only a shoulder wound and a gimpy leg.