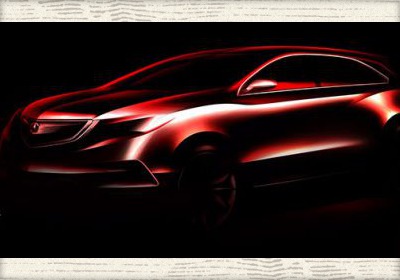 Acura says it will show a prototype of its 2014 MDX crossover at the 2013 Detroit Auto Show, and we'll admit that the announcement has left us in a bit of confusion. See, the Acura press release says that the MDX proto will present "Aero Sculpture" design language, "alluring proportions" and "arching body lines." It has been accompanied by a sketch (above, click to enlarge) that, indeed, shows off a swoopy, alluring CUV.

Yet we have spy shots from two months ago of what is supposed to be the 2014 MDX, and unless the camouflage is actually some sort of vehicular moo moo, there isn't really a swoopy line on it. It is stout and substantial, but not in a way that makes us think of "Aero Sculpture." We'll know in a few weeks where the truth resides. It would appear that Acura's rendering artist has done a masterful fade on the rear glass/D-pillar area of the vehicle.

If you want to see the answer in real time, the reveal will be broadcast as it happens on Acura's webcast site. There's a press release below with the details.