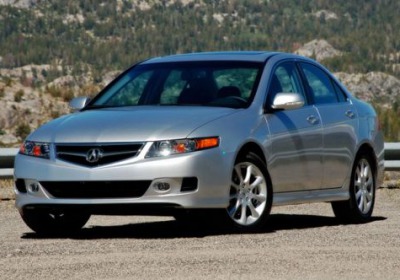 Parent company Honda is issuing a recall for Acura TSX vehicles from model years 2004 to 2008, for a rather interesting fault with the electrical systems (well, kind of). It seems that TSX made between during that range have carpeting that degrades when it becomes saturated with "corrosive materials for deicing." The carpeting is in contact with each Acura's electronic control unit, which may in turn rust or become corroded as a result. All of that business could cause the engine to stall.

Owners of affected vehicles will be notified by Honda and instructed to bring their cars into the nearest Acura dealership. Dealers will inspect the ECU for damage, replace if needed, and cover with a waterproof piece; all free of charge. Check out the official recall notice below.

Honda is recalling certain model year 2004-2008 Acura TSX vehicles originally sold in, or currently registered in, Connecticut, Delaware, Illinois, Indiana, Iowa, Kentucky, Maine, Maryland, Massachusetts, Michigan, Minnesota, Missouri, New Hampshire, New Jersey, New York, Ohio, Pennsylvania, Rhode Island, Vermont, Virginia, West Virginia, Wisconsin and the District of Columbia. In states that use corrosive materials for deicing, driver's footwear may bring in materials that saturate the vehicle's carpeting, which is in contact with the vehicle's engine Electronic Control Unit (ECU). As a result, the ECU case may experience rust or corrosion. This damage may potentially cause the engine to stall.

A vehicle stall increases the risk of a crash.

Honda will notify owners and Acura dealers will inspect the vehicle and replace any damaged ECU, free of charge. All vehicles will have a waterproof cover installed onto the ECU, free of charge. The recall is expected to begin on April 11, 2013. Owners may contact Honda at 1-800-999-1009.