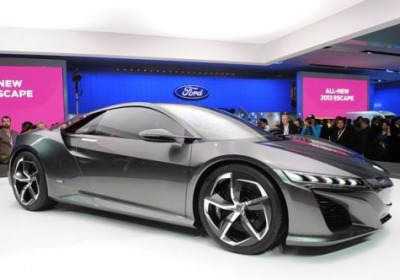 Honda today confirmed that the forthcoming Acura NSX hybrid supercar will be built at a brand-new facility in Ohio. This will be the company's third plant in Ohio, and will come as the result of a $70 million investment. Honda first hinted that NSX production would be coming to Ohio when the original concept car was revealed at the 2012 Detroit Auto Show.

Honda's new facility, called the Performance Manufacturing Center, will encompass a 184,000-square foot space inside of the automaker's former North American Logistics building and will employ 100 associates. As you might expect, the Performance Manufacturing Center is located just a few miles from Honda's American-based R&D facility, as well as the Marysville auto plant, where production of the 2014 Accord Hybrid will kick off this fall.

"The location of this facility is in the midst of one of the greatest collections of engineering and production talent in the world. So it makes sense that we will renew the dream and build this high-tech, supercar in Marysville, Ohio," said Hidenobu Iwata, president and CEO of Honda of America, in a press release.

Production of the Acura NSX will begin sometime in 2015. We have already seen the hybrid hero several times in conceptual form, with the latest reveal at this year's Detroit Auto Show giving us a glimpse at the car's interior.

Scroll down for the full details in Honda's press release.

MARYSVILLE, Ohio, May 14, 2013 – Acura today announced that the all-new NSX supercar will be produced at a new Performance Manufacturing Center in Ohio, a $70 million advanced production facility encompassing 184,000 square feet to be housed inside Honda's former North American Logistics facility and located in the midst of Honda's existing R&D and production engineering operations.

The site for the new production facility, which will be Honda's third auto plant in Ohio, is only a few miles from the Honda R&D Americas, Inc. Ohio Center that is engineering the supercar for production and adjacent to Honda of America Mfg.'s Marysville Auto Plant. The Performance Manufacturing Center also is close to Honda Engineering North America, Inc., center for the development of new production technologies.

A part of Honda of America, the Performance Manufacturing Center will be a unique manufacturing operation that will employ approximately 100 highly skilled manufacturing associates drawn from within Honda's existing operations in Ohio. In addition, associates at Honda's engine plant in Anna, Ohio, will assemble the NSX powertrain.

"Thirty years ago, building cars in America was a big dream. Working together, here in Ohio and across North America we turned this dream into reality," said Hidenobu Iwata, president & CEO of Honda of America and the head of Honda's manufacturing operations in North America. "The location of this facility is in the midst of one of the greatest collections of engineering and production talent in the world. So it makes sense that we will renew the dream and build this high-tech, supercar in Marysville, Ohio."

"This new plant will be as unique as the vehicle we will build here," said D'Souza. "In creating the plan for this plant, we looked closely at each process and determined the perfect blend of associate craftsmanship and technology to adopt a new approach to manufacturing."

The Acura NSX Concept was on display at the event, attended by local community and government leaders, including Ohio Governor John Kasich, showcasing the NSX's low and wide stance that will help fulfill the Acura brand product direction centered on the synergy between man and machine.

The new NSX is being developed by a global R&D team led by designers and engineers at Honda R&D Americas, Inc. located in Los Angeles, Calif., and Raymond, Ohio. The NSX will feature a unique powertrain and body structure to provide an incredible driving experience. It will be powered by a mid-mounted V-6 engine mated to Acura's innovative new Sport Hybrid SH-AWD (Super Handling All Wheel Drive) system.

"We have a very clear understanding of the high customer expectations luxury buyers around the world have for a supercar, and our challenge is to exceed them and create new value for the customer," said Klaus. "This new Performance Manufacturing Center will be key to this challenge."

The original Acura NSX was built at the Takanezawa Plant in Japan from 1990 until production moved to the Suzuka Plant in early 2004, where it was produced until 2005. Part of the Tochigi Factory, the Takanezawa Plant was the first manufacturing facility in the world to mass-produce an all-aluminum body and balance advanced production equipment with hands-on "craftsman" processes.