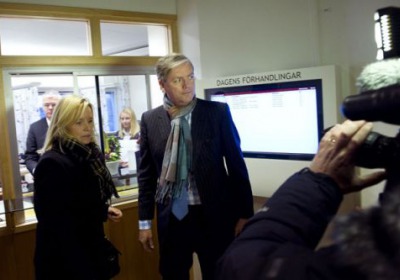 The Associated Press reports three former Saab executives have been arrested on charges of accounting fraud. Swedish prosecutor Olof Sahlgren has refused to identify the individuals, but says they're suspected of attempting to evade taxes by falsifying Saab accounts between 2010 and 2011 during the Spyker years. Other reports indicate the parties involved include former General Counsel to Saab Kristina Geers (seen to the left of former CEO Victor Muller, above), a 15-year-veteran of the company – her husband, Eric, was the company's communications director for 9 years as well.

Saab filed for bankruptcy in 2011, and was purchased shortly thereafter by National Electric Vehicle Sweden. If convicted, the trio could face up to four years in prison for their crimes under Swedish law.