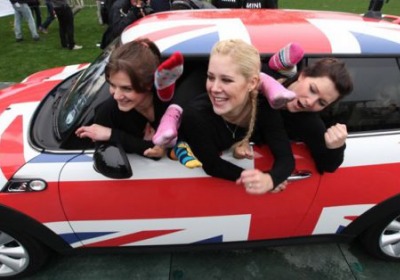 The Mini Cooper is now confirmed as a great car with which to pick up chicks-up to 28 of them at a time, to be specific. That's the number of limber ladies you can fit in a Mini, as proven earlier this week in London.

The flexible females used every available space in the car, including the footwells and dashboard, to set the Guinness World Record for the most people inside a 2012 Mini. They beat their own previous record of 27, set last year.

Organizer Dani Maynard said before the attempt that the girls had undergone extra training and stretching since last year's record-breaking stunt. "While we have not quite been able to fit any of the girls into the Mini's glove box, there is a surprising amount of space to utilise," she told UK news site Metro.

After successfully extricating themselves from the new Mini, the team sprinted over to a TV studio where 23 of them managed to squeeze into an original, much smaller classic Mini. That was enough to break the previous record of 21. You can watch a video of the event and read the official press release below.

A team of gym members from East Sussex have today smashed two Guinness World Records world records for the number of people inside both a classic Mini and a 2012 MINI.

28 flexible ladies crammed their way into the MINI Hatch at Potters Fields Park, London as part of the eighth annual Guinness World Records day. The team broke their own previous record of 27 people, which they set in Eastbourne last year.

The ladies made full use of every inch of space available in the MINI, including the dashboard, the footwells and they even managed to squeeze four people in the boot.

As soon as they celebrated their first record the ladies dashed off to the ITV studios to attempt the second record live on This Morning, where by squeezing a staggering 23 ladies into a classic Mini, they managed to beat the previous record by two people.