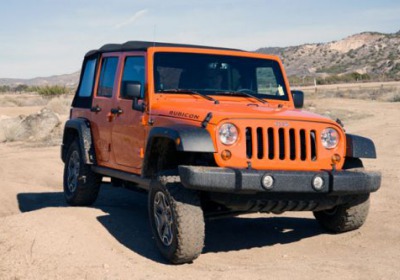 Hey, Jeep fans. If you think the idea of a funky-looking, car-based Cherokee revival is offensive, have a listen to what might be in store for the next-gen Jeep Wrangler. Automotive News is reporting that as Jeep develops the 2016 Wrangler, weight reduction is a crucial target, and the Wrangler's rugged solid axles could be sacrificed in the name of better fuel economy.

We've already heard the next Wrangler will go on a serious diet using aluminum body panels and an air suspension system, so the idea of a four-wheel independent suspension setup for this OG SUV isn't all that surprising. Besides, it's not like an independent suspension would limit the Wrangler's off-road abilities – just check out the Hummer H1. In fact, it might be the aftermarket parts companies – not Wrangler enthusiasts – who would be most disappointed by such a drastic suspension change, as the article states that the Wrangler's solid axles and coil-link suspension make it the most popular SUV for customization.

There are probably still a couple years before we'll start hearing any concrete details about the 2016 Wrangler, at which time it will be interesting to see how stricter fuel economy and crash safety regulations have been balanced with traditional Wrangler cues like its removable doors and roof and folding windshield. Let us know in the comments below if a Wrangler sans solid axles is any less of a Wrangler.