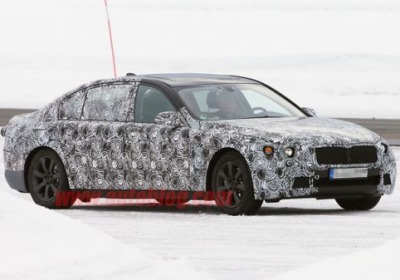 Ladies and gentlemen, Bimmerphiles and automotive voyeurs of all stripes: here is your next-generation BMW 7 Series. Captured in photographs for the first time ever while doing a spot of cold-weather testing in Sweden, this newly slim 7er will most likely debut at the Frankfurt Motor Show in 2015 and launch in the 2016 model year.

Sources indicate that BMW is targeting a much lighter curb weight for the 7 Series, and will use learnings gained with the i3 and i8 development to add carbon fiber-reinforced plastics in the construction. In return we'd expect the new model – which uses the internal model designation "G11" – to offer improvements in handling, acceleration and fuel economy. As with the current 7 Series lineup, expect the engine range to include turbocharged inline-six engines, one or more V8s and a V12 option.

It's fair to say that, with the car's debut still years down the road, that BMW will work to launch with an impressive suite of in-car technology, too. A completely new version of iDrive shouldn't be ruled out. These shots mark the beginning of a long journey to 2015, and we expect to have loads more information to share in the coming months and years, so stay tuned.