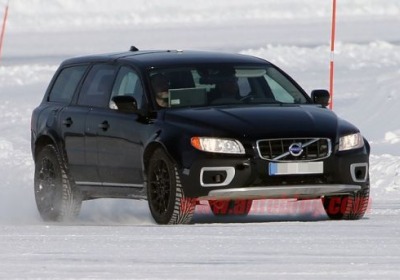 The Volvo XC90 was a big step for the Swedish automaker in 2003, but the midsize crossover has changed very little since its introduction. All that's about to change as Volvo starts its initial development on the 2015 XC90, which we see for the first time in these spy shots showing a cobbled-together XC70.

Like the current XC90, the next-generation model will be both longer and wider than the XC70 – judging by the modifications made to this mule's body – which will continue to allow Volvo's flagship crossover and provide three rows of seating. The next XC90 will ride on a new platform that will eventually make up around two-thirds of all Volvo sales, called the Scalable Product Architecture (SPA).

Our shooter managed to find out the registration number for this mule, which indicated that it was powered by a five-cylinder diesel, but we expect the automaker to start stepping away from its current powertrains with a big push toward smaller engines courtesy of the new Volvo Engine Architecture (VEA). Rumor has it that the future engine lineup for the XC90 will rely heavily on turbocharged four-cylinder engines and eight-speed automatic transmissions, which will likely eliminate or lessen some of the current mills available like a straight-six or V8.

The automaker previously stated that the new XC90 would debut in late 2014, but it sounds like delays could push the launch into early 2015.