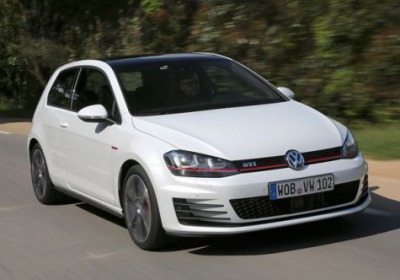 North American car buyers get a bit of a slap in the face when it comes to delivery schedules for new the Volkswagen Golf and pumped-up GTI models. We'll just repeat the old chestnut: It's worth the wait... even though it still stinks. This time around, Western Europe is taking deliveries of the new Golf as we speak, and GTI deliveries start between May and July. North America doesn't get the Mk7 Golf or GTI until about July of 2014.

So we approached our first drive of the new GTI with this chip on our shoulder: "You're making us wait? Well, then at least give us the exact car we'll be able to buy. No compromises, mein freund." And so it was that we extracted nearly all of our drive impressions from behind the wheel of what, for the United States, will technically be a model year 2015 two-door Volkswagen Golf GTI Performance with the standard six-speed manual.

This time around, Volkswagen in Wolfsburg and in Herndon, VA, explain the wait in very practical terms. Whereas before it was just a long wait while Volkswagen slowly realized it needed to properly invest in North America, the wait this time is because VW needs to get its Puebla, Mexico, factory completely on-line to build all of North America's Golfs and GTIs. The deadline for this happening is... July 2014. We're still gonna whine about it though, because that's how we roll.

At least in North America, the GTI thus cracks a special mental barrier regarding curb weight. By losing those 93 pounds of love handle, the Mk7 GTI in two-door trim with a manual transmission gets back down below 3,000 pounds to 2,941, despite being longer and wider than the Mk6. Almost all of the weight loss can be attributed to VW exploring ever thinner gauge high-strength steels for both the sheetmetal and all of the main joinders of body and chassis, the goal being to lose weight while gaining strength and stiffness.


The traditional Jacky plaid sport fabric on the seats has been evolved into a new pattern dubbed Clark.

The traditional Jacky plaid sport fabric on the supportive sport seats has here been evolved into a new pattern dubbed Clark, and the standard 18-inch wheels for the Mk7 are a new design called Brooklyn, instead of the current model's standard Detroit-style alloys. Through the ceaseless curves of the southern French Alps, where we are all World Rally Championship drivers, both the chairs and Bridgestone Potenzas wrapped around the Brooklyns did their jobs without a hitch. They have some important little helpers in the Mk7, and it's these aids that take the new GTI to a place where no other front-wheel-drive hot hatch can tread with such overwhelming confidence.

The base car with standard progressive steering and VW's latest XDS+ electronic limited-slip action is a solid setup. The electronically assisted steering with 2.0-turns from lock to lock is weighted nicely and pleasingly precise. Critically, XDS+ goes one step further from its Mk6 XDS iteration. Instead of augmenting handling by reacting only through the brakes and stability control system, it can be proactive in off-brake moments where added front-end control is deemed desirable. Thus, it will still apply light braking to the inner wheel during dynamic driving as you approach the next curve, yet it will also assist even without any steering angle input when needed on all types of road surfaces – including snow.

But... but, we had the Mk7 in Performance trim for the meat of this test, an option setup that figures to cost somewhere around $1,200 extra over the projected $24,700 base price tag. The package includes larger-diameter, internally vented brake discs gloved by pretty red calipers stamped with a white "GTI," 10 more horsepower, a maximum-torque phase that stretches out 200 more revs to 4,600 rpm, a higher 155-mph top speed, one-tenth of a second quicker acceleration to 60 mph, and an all-important front Haldex-style electrically controlled mechanical locking sport differential. Yep, you do want this significant extra.


VAQ alone can peel off eight seconds from a perfect GTI lap of the Nürburgring.

This new differential, called VAQ in Deutsch for "Vorderachs-Quersperre," is available for the first time on a roadgoing front-drive compact car, and it showed what it was born to do curve after delicious curve out there on the region's rally special-stage roads. Volkswagen says that this feature alone can peel off eight seconds from a perfect GTI lap of the Nürburgring. For the past couple of years, this technology has been put to the test on the company's Volkswagen Scirocco racecars, so VAQ has been thoroughly beaten to a pulp and vetted.

What happens with this lightweight and simple solution that affords such hugely satisfying results is not revolutionary if you stare at it on paper, but that doesn't mean it isn't new and effective. The VAQ senses not only tangible or potential slippage and understeer in the front wheels through curves, it also monitors g-forces on each wheel to know which corner to send the greater oomph (normally the outer one), while just backing off on the wheel with less load (the inner one). There is still the light braking and ESC action of XDS+ going on as well, but VAQ amounts to a stunning further step.


No factory-issue Golf has ever come this far in extending our abilities. Not even an R32 or present Golf R.

We felt the potential of the system most while hitting the accelerator hard coming out of the myriad French curves we encountered. The outer wheel was actually grabbing and tugging at the tarmac, showing us the way, but it was smooth enough and in keeping with the drama of the moment. Combined with the new chassis, which sits sixth-tenths of an inch lower on firmer springs and dampers, the GTI is an empowering revelation. After we became confident in VAQ's abilities, we got the feeling that there was almost no limit to what was possible. There is effectively no understeer push and no torque-steer tugging going on. No factory-issue Golf has ever come this far in extending our abilities during super-hot escapades. Not even an R32 or present Golf R.

On a dry and ideal sports car day like this one, the 227-hp GTI Performance with VAQ and the standard progressive steering and squatting chassis was simply spectacular. We do think the Performance trim should include an angrier optional exhaust, but other than that, we are comprehensively bowled over. Playing with the dynamic chassis control interface's five modes – Comfort, Normal, Sport, Eco, Individual – via the optional onboard touchscreen, we were also able to turn the GTI Performance into a docile and mild-mannered family car for simple straight-line cruising. Left in the eco setting, this latest interpretation of VW's omnipresent 2.0-liter TSI improves its fuel use and lessens its CO2 footprint by 18 percent versus the Mk6 GTI.

One more thing: The optional six-speed DSG dual-clutch automated gearbox remains good work, but on a GTI, we prefer a six-speed manual with the appropriate golf-ball-style knob and a clutch pedal. Fewer people every year are sticking with the stick, however, with roughly half of GTI owners in the US and Germany opting for the paddle-shift setup. In addition, as we noticed recently on a drive of the latest Euro-market Audi S3, heel-and-toeing is not really encouraged by the pedal orientation. Regardless, our staff has owned a few GTIs in its day, and for our tastes, we still prefer a good six-speed manual – even if we have to adapt our heel-toe style to suit.

We can't wait to see how the GTI and its Performance package version stack up against the heady likes of the Ford Focus ST, Mazda Mazdaspeed3 and new Subaru WRX STI. The GTI Performance tester we sat in most of the day puts any Mini John Cooper Works – except maybe the pricey new JCW GP edition – squarely into the weeds.

But, of course, we can't do any comparisons on US soil until July of 2014, and that just plain stinks.

See also: Volkswagen Passat gets Wolfsburg Edition, priced from $23,495*, Help a couple drive their 1984 Vanagon around the world, Volkswagen lays off 500 Chattanooga workers.