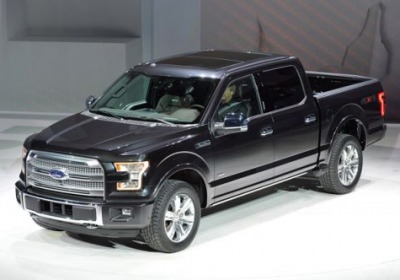 Just when you thought you'd figured the fullsize truck market out, Ford goes and throws us a massive curve ball with the 2015 F-150. The big headline news aren't tow or payload ratings, though we're sure those figures will be fully competitive if not class leading, they haven't yet been announced. Instead, the big headline news Ford is highlighting are the truck's new aluminum-intensive structure and 2.7-liter EcoBoost V6 engine.

And with good reason – all that aluminum means that Ford was able to cut a massive 700 pounds from the truck's curb weight. That is going to cause all sorts of great things to happen to the 2015 F-150's driving dynamics, performance and fuel efficiency, not to mention its ability to haul heavy loads. For those customers worried about the strength of aluminum versus the more conventional steel, Ford is quick to point out that many military vehicles, such as the HMMWV and Bradley Fighting Vehicle, use a very similar sort of aluminum alloy in their construction.

It's also worth mentioning that the backbone, a fully boxed ladder frame, is hewn from high-strength steel. Ford says "2015 Ford F-150 is the strongest and most durable F-150 ever," for what it's worth, claiming that "torture tested" in labs and in the real world for more than 10 million miles. What's more, the truck, in disguised form, completed all 883 miles of the Baja 1000.

Engine options are equally intriguing, with a new 2.7 EcoBoost V6 engine making the most headlines. That engine, which Ford says will "deliver the same power as some mid-range V8s," doesn't yet have official power or efficiency ratings but sits right above the base 3.5-liter V6. The well-known 3.5-liter EcoBoost V6 carries over, as does the 5.0-liter V8. Other high-tech tidbits include a 360-degree camera, which ought to make maneuvering the massive truck much easier, LED lighting all around, an eight-inch in-cabin LCD screen.

Expect the new 2015 F-150 to hit the market later this year. Have a gander at our high-res image gallery live from the Detroit Auto Show above, and scroll down below for the official press release.

More capable: Up to 700 pounds less weight plus four engine choices for an impressive combination of power, capability and efficiency


DETROIT, Jan. 13, 2014 – Ford today introduces the all-new Ford F-150, the reinvention of America's favorite truck. It is the toughest, smartest and most capable F-150 ever – setting the standard for the future of trucks.

The all-new F-150 delivers an impressive combination of power, capability and efficiency – from advanced materials that improve durability and inhibit corrosion, to faster processors that enhance driving performance, to breakthrough cargo management and towing solutions.

"F-150 is well-known for being Built Ford Tough. Now, it is both tough and smart," said Mark Fields, Ford Motor Company chief operating officer. "The all-new F-150 redefines the future of trucks, and it is yet another example of our One Ford plan producing vehicles that serve customers with a commitment to the very best quality, fuel efficiency, safety, smart design and value."

"We have a unique connection with our customers," said Joe Hinrichs, Ford executive vice president and president of The Americas. "Time and again, F-150 has delivered the tougher, smarter features they want along with the capabilities they need for work or play. We build our trucks to their high standards."

In designing the backbone of the F-150, Ford engineers improved the truck's signature fully boxed ladder frame. It is all-new with more high-strength steel than ever – making it stronger and lighter. High-strength, military-grade, aluminum alloys – already used in aerospace, commercial transportation, energy and many other rugged industries – are used throughout the F-150 body for the first time, improving dent and ding resistance and also saving weight. Overall, up to 700 pounds of weight have been saved, helping the F-150 tow more, haul more, accelerate quicker and stop shorter, and contributing to efficiency.

"More than ever before, customers want a truck that is a dependable partner, mobile office and a go-anywhere workshop," said Raj Nair, Ford group vice president, Global Product Development. "To meet the needs of our truck customers, we created smart new features and a whole new approach to using advanced materials and engines to improve capability and efficiency."

Even tougher
The 2015 Ford F-150 is the strongest and most durable F-150 ever. Before it goes on sale, it will have been torture-tested in labs, at Ford proving grounds and in the hands of some of Ford's most demanding truck customers for more than 10 million miles.

The grueling testing simulated the demands Ford's customers will subject the truck to throughout its average lifetime. The tests include crisscrossing the country pulling heavy trailers and hefty loads through desert valleys and over high-altitude mountain passes – in temperatures from 20 degrees below zero to 120 degrees Fahrenheit.

Customers using the F-150 for construction, mining and utilities have tested and helped prove out its high-strength aluminum-alloy cargo box.

A disguised new Ford F-150 even raced in the Baja 1000, where it earned the distinction of completing all 883 grueling miles while some other purpose-built race vehicles could not.

Even smarter
Several groundbreaking new productivity features debut in the all-new F-150, including many class-exclusives. They include:

- 360-degree camera view, using exterior cameras to create a bird's-eye view of the truck to help the driver park, maneuver in tight spots and navigate down narrow roads and trails
- Integrated loading ramps, which enable easy loading of ATVs, motorcycles and mowers
- BoxLink™, which is a combination of metal brackets and custom cleats used to secure a variety of accessories in the cargo box, from ramps to storage bins to bed dividers
- LED headlamps and taillamps, which provide excellent nighttime visibility
- Trailer hitch assist, a new rear view camera feature that adds a dynamic line based on steering wheel angle in the display to help customers line up truck and trailer without requiring a spotter or having to get out of the vehicle
- Smart trailer tow module, using an all-new smart trailer tow wiring harness that helps identify and inform the driver of potential trailer connectivity issues, burned or unlit trailer marker lamps, and brake light and trailer battery faults
- Remote tailgate, allowing for the tailgate to be locked, unlocked and released with the key fob – eliminating manual locking and increasing convenience and security. The tailgate also is damped, dropping down, hands-free, to a flat position when opened
- High-wattage power outlets (400 watts, 110 volts) in the cab, allowing drivers to easily charge corded tools, battery chargers or mobile devices on-site or while driving
- LED spotlights on sideview mirrors, which provide powerful, durable and bright lighting around the truck exterior
- Latest EcoBoost® technology in an all-new, even more efficient 2.7-liter EcoBoost engine that features extremely high output and lightweight design
- Next-generation tailgate step, which is now fully integrated inside the tailgate and virtually invisible when not in use

Other smart innovations include:

- New 8-inch LCD productivity screen in the instrument panel, which includes updated truck apps – from fuel economy to towing tips – and the ability to create a customized home screen for customers to access their most frequently used apps in one place
- LED lighting embedded in the walls of the cargo box, which brightly illuminates the box interior to help customers quickly find tools or other items
- Rear under-seat storage in F-150 Super and Crew cabs, providing hidden storage for valuables. Two storage bins also are located underneath the rear seats
- Boxside step, now available for the short 5.5-foot box

- Second-row inflatable safety belts, which work like a traditional belt but include a tubular airbag that inflates in the event of a crash and distributes the force of the impact across a wider area of the passenger's chest
- Curve Control, which automatically provides more aggressive four-wheel braking when the truck is going into a corner too fast
- Adaptive cruise control, allowing drivers to set a cruising speed and use radar technology to monitor traffic ahead and maintain a safe distance between vehicles
- Lane-Keeping System, which is designed to help avert unintentional drifting of the vehicle outside the intended driving lane by automatically detecting the left- or right-hand road lane markings using a camera mounted between the windshield and interior rearview mirror
- Blind Spot Information System with cross-traffic alert, which uses radar hidden in the taillamps to detect a vehicle entering a driver's blind spot while driving or backing up

Auto Start-Stop technology helps save fuel. Unlike start-stop solutions in other vehicles, this technology – specially tuned for truck customers – shuts off the engine to save fuel when the vehicle is stopped, except when towing or in four-wheel drive. The engine restarts in milliseconds when the brake is released.

The FX4 off-road package can be added to most four-wheel-drive models, improving trail capability with an electronic locking rear axle, skid plates and off-road-tuned shocks.

Both the exterior and interior design of Ford F-150 reflect decades of listening to customers and understanding their occupational and recreational needs. The exterior is characterized by a new shape that suggests capability, with a wider Built Ford Tough stance, prominent wheel arches and chiseled grille.

Comfort, utility and refinement define the truck's interior. Ergonomically optimized seating for the front row positions enhances comfort, while extending legroom for rear passengers. Buttons and controls are optimized so they can be operated while wearing work gloves.

Storage options include laptop stowage in the center console, as well as quick storage solutions for cellphones, drinks, pens and business cards.

"Once again, the Ford F-150 establishes new standards in durability, capability, technology and efficiency to help F-150 owners be more productive 24/7 – whether for work or weekend fun," said Nair.

The F-150 will continue to be manufactured at Ford's Dearborn Truck Plant in Dearborn, Mich., and Kansas City Assembly Plant in Claycomo, Mo.