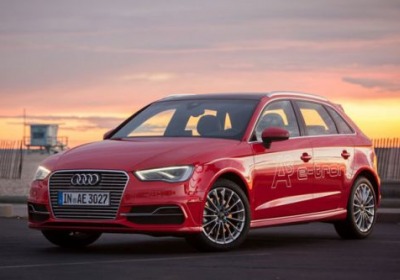 A little more than a year ago, I drove an Audi A3 E-Tron prototype – an early concept electric vehicle built on the outgoing second-generation A3 platform. While I was impressed with the technology, its 3,800-pound weight, 10-second 0-60 time and 90-mile range will likely put it only mid-pack, at best, among its future competitive set. But Audi promised bigger and better things would come.

I didn't have to wait long. Immediately following the Los Angeles Auto Show, Audi asked me come drive its all-new successor built on the company's third-generation A3 chassis. Compared to last year's model, the new plug-in hybrid electric vehicle (PHEV) boasts a lighter curb weight, quicker acceleration and six times the range. Calling it improved is an understatement. Best of all, it's heading to production.

Technically speaking, the 2015 Audi A3 Sportback E-Tron is a parallel hybrid, meaning its electric motor is sandwiched between a combustion engine and an automatic transmission – either, or both, is capable of powering the front wheels. The gasoline-powered engine is a direct-injected and turbocharged 1.4-liter four-cylinder, rated at 150 horsepower. The transmission is a six-speed dual-clutch gearbox. A 75-kW electric motor sits between the two. Water is used to cool the gasoline engine, the electric motor and the battery pack – there are three independent closed loops.

Since Audi engineered the A3's platform from the outset to accommodate a variety of powertrains, the hybrid system is hidden discreetly. The compact powerplant is transversely mounted in the nose of the chassis, while the 96-cell lithium-ion battery pack, which weighs 276 pounds, is wholly contained beneath the second row seat cushion (in addition to the battery's sturdy diecast aluminum casing, there are metal rails beneath each side of the underbelly to protect the battery pack from raised obstacles such as tall speed bumps). A 10.5-gallon unleaded fuel tank, feeding the combustion engine, is located above the rear axle. All told, the A3 Sportback E-Tron tips the scales at just 3,470 pounds, which is actually quite light compared to most hybrid vehicles.