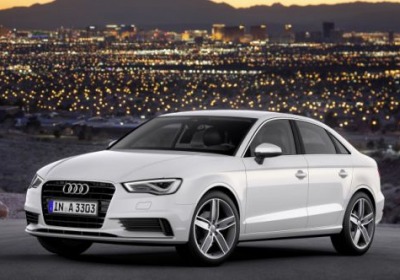 One year after the all-new Audi A3 bowed in Europe, the US finally will get the 2015 A3 sedan in 2014, and the German automaker announced yesterday that it's priced from $29,900 (*not including destination, and we've reached out to Audi asking for the price of delivery). A bit later in 2014, the A3 Cabriolet will be released along with the S3 sedan. The A3 Sportback will be a 2015 model, though it will only be offered as a gasoline-electric hybrid. Prices weren't given for those models and, sadly, the three-door hatch isn't slated for US consumption.

The A3 sedan will be offered with three engine choices, all of them featuring direct-injection, turbocharging and four cylinders: a 1.8-liter TFSI, 2.0-liter TFSI and 2.0-liter TDI – that last one's a diesel. If you count the S3 sedan, that's another engine in the lineup – a 296-horsepower version of the 2.0 TFSI.

As we were told at the 2014 A3's "unofficial" world debut in New York City earlier this year, Audi says US customers won't get the option of a six-speed manual transmission, as the Europeans do. All engines will be mated exclusively to a six-speed dual-clutch transmission.

For more information on the A3 sedan, head on below to the press release, where you'll also find a behind-the-scenes b-roll video of its NYC debut.

AUDI ANNOUNCES PRICING FOR ITS ALL-NEW 2015 A3 SEDAN

- The A3 sedan brings a new level of standard features, craftsmanship and attention to detail to the fast growing entry premium market
- An all-new A3 family from Audi will be rolled out over the next 18 months

Audi today announced base pricing for its all-new 2015 A3 sedan. This compact powerhouse represents the entry level to the Audi brand of luxury vehicles with no compromises – it will offer a combination of standard features including a panoramic glass sunroof, leather seating surfaces, and bi-xenon headlights, all at a base MSRP starting at $29,900 .

"The Audi A3 sedan raises the bar in this premium compact segment" said Scott Keogh, President, Audi of America. "It will add to our momentum in the U.S. marketplace by bringing a new level of technology, craftsmanship and performance to the market."

The A3 sedan plays a pivotal role in the soon to be expanding Audi A3 family. It will be joined later in 2014 by the recently announced Audi A3 Cabriolet, A3 TDI clean diesel, the high-performance S3 sedan and in early 2015, the A3 Sportback e-tron® gasoline electric hybrid (PHEV). Even the base model of the all-new premium Audi A3 comes equipped with standard features that include Audi signature LED DRLs and taillights, Bluetooth® technology, Audi pre sense® basic and a panoramic glass sunroof.

The A3 also marks the first time that a vehicle in this segment will offer MMI® technology, Audi drive select, 4G LTE connectivity and Bang & Olufsen® audio. Delivering the same prestige and high-quality materials found in the brand's flagship A8 model. The A3 will also feature standard leather seating surfaces and exceptional ergonomics.

The A3 sedan will offer versatile powertrains for a wide variety of entry-luxury customer tastes, including a 1.8 TFSI®, 2.0 TFSI®, 2.0 TDI® clean diesel, and a high-output 2.0 TFSI® offered in the S3. For superior traction and handling the A3 will also offer the legendary Audi quattro® all-wheel drive which distributes power to the wheels that need it most.

All engines are mated to the standard 6-speed S tronic® transmission, which provides the driver immense shifting flexibility and driving pleasure with smooth, dynamic acceleration and virtually no interruption to the power flow.

The A3 will feature an all-new design and has been specifically tailored to meet the sedan preferences of the American market. The signature Singleframe® grille and available full-LED headlights, another first for the A-segment, are some of the notable design changes included in the all-new Audi A3 sedan.