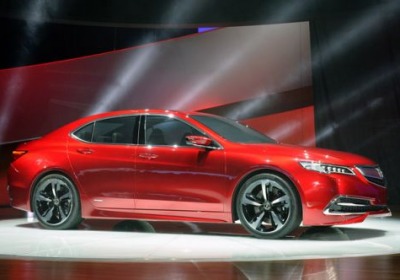 Herein lies the broom that will sweep away both the TL and the TSX, and its name is the Acura TLX Prototype. Proposed as a "red carpet athlete," the production midsize TLX will slot in between the ILX and RLX range-topper in the brand's sedan lineup while presenting its take on "luxury refinement and sports-sedan athleticism with exhilarating performance."

Custom five-spoke alloys on low-profile tires support a sedan full of design cues honed on other Acura models, including a chiseled hood and exaggerated fender lines with shorter overhangs (the TLX is 3.8 inches shorter than but has the same wheelbase as the TL), all draped in Athletic Red Pearl paintwork. Acura's Jewel Eye headlights get a supporting act from the side mirrors, where a strip of LEDs light up dynamically when the turn signal is used.


The TLX's upscale powertrain option will be a direct-injected 3.5-liter V6 with cylinder deactivation, paired with a new nine-speed automatic.

When it goes on sale later this year, the TLX's base powertrain choice will be a brand-new, direct-injected 2.4-liter four-cylinder shifted through an eight-speed dual-clutch transmission. Oddly, said gearbox will include a torque converter, but it isn't immediately clear how this traditional slushbox feature is integrated, or why. We've asked Acura for more engineering details and will let you know when we hear more.

The TLX's upscale powertrain option will be a direct-injected 3.5-liter V6 with cylinder deactivation, paired with a new nine-speed automatic. The front-wheel-drive car will get directional help from Acura's Precision All-Wheel Steer (P-AWS) system, while the 3.5-liter can be had with a lighter, reprogrammed version of the company's Super-Handling All Wheel Drive.

It looks like both driveline options come equipped with an Integrated Dynamics System (IDS) that has four driving modes (Economy, Normal, Sport and Sport+) that will alter steering and throttle response, transmission shift points, driveline control logic, Active Noise Control and, in Economy mode, even the heating and ventilation settings.

There's a press release below with more details on this most important addition to the Acura lineup, and you can also watch the just-completed reveal on video as well. We'll bring you more details and live images from the Detroit Auto Show floor.

DETROIT, MI, Jan. 14, 2014 – Acura today unveiled the 2015 Acura TLX Prototype showcasing the design and performance direction for the all-new 2015 TLX performance-luxury sedan launching mid-year at Acura dealerships nationwide. The TLX was developed around the theme"Red Carpet Athlete" to deliver a compelling blend of luxury refinement and sports-sedan athleticism with exhilarating performance enhanced by next-generation Acura powertrain and dynamic handling technologies. The TLX will join the ILX compact luxury sedan and the RLX luxury performance sedan as the third vehicle in Acura's sedan lineup.

"The Acura TLX Prototype is a precursor of some amazing things we have in store for our Acura sedan customers," said Mike Accavitti, senior vice president, American Honda Motor, Co., Inc. "As you would expect from an Acura, this completely new model will offer innovative technologies that break down the barriers between the driver and the machine to deliver a more intuitive, connected and personal driving experience."

The TLX Prototype, bathed in Acura Athletic Red Pearl, presents a lithe exterior form, taut body surfaces and sports-sedan proportions. Its sporting character is further highlighted by its low and wide stance, shortened front and rear overhangs, dynamically sculpted fender arches, and purposeful character lines. Acura's signature Jewel Eye™ LED headlights imbue the TLX Prototype with an advanced and bright-eyed appearance while producing superior down-the-road illumination. The prototype's custom-designed five-spoke 20-inch alloy wheels and 265/35ZR20 low-profile tires accentuate its athletic stance, while the sculpted hood with its sharply creased bilateral ridgelines hints at the performance capabilities of the advanced new Acura powertrain that lies beneath. Another prototype-exclusive feature is the tailor-made side mirrors. Keying off of the Jewel Eye™ LED headlights, each mirror has a row of LED lights fused into its base. Click on the turn indictor, and the LEDs come to life, spreading a moving glow around the bottom of the mirror for a high-tech, 3D appearance.

Dimensionally, the TLX Prototype presages the production 2015 TLX sedan and is 3.8 inches shorter in overall length (190.2 inches) than the current TL, yet rides on the same 109.3 inch wheelbase as the TL. The prototype's right-sized dimensions place the new TLX neatly in between the smaller ILX and larger RLX sedans. Despite its more compact exterior footprint, the TLX design targets the most spacious interior in the midsize luxury sedan class – roughly on par with the current TL – with an open and airy greenhouse, commanding sight lines, ample cargo capacity and comfortable seating for five adults.

And like any truly world-class athlete, the TLX will pair power and efficiency with deft agility. With its low and wide stance, rigid yet lightweight body, and nimble and responsive chassis, the TLX is designed to deliver confident, precise and refined ride and handling performance in almost any driving situation. From low-stress urban commutes to relaxed long-distance cruising, or adrenaline-inducing runs down twisting country roads, the TLX is designed to be an intuitive and confidence-inspiring driving partner, a vehicle that epitomizes Acura's dynamic concept of "performance at the will of the driver."

For even greater power and performance, there is a 3.5-liter SOHC V-6 that also employs direct injection and VTEC variable valve control and cam timing along with fuel-saving Variable Cylinder Management™ (VCM™) cylinder deactivation technology. The 3.5-liter V-6 is mated to a new 9-speed automatic transmission with closely spaced gear ratios and a wide overall ratio range to further extend engine performance and fuel efficiency. Both the 2.4-liter and 3.5-liter TLX models will target EPA fuel economy ratings at the top of the midsize luxury sedan class.

Two-wheel-drive models with either the 2.4- or 3.5-liter powerplant will utilize the next generation of Acura Precision All-Wheel Steer™ (P-AWS™) technology with independent left and right rear wheel toe control. As four-wheel steering becomes an increasingly popular technology on high-performance automobiles, Acura continues to evolve and improve the capabilities of its cutting-edge P-AWS system, first launched on the RLX sedan in 2013, to deliver even more responsive handling, precise steering control and high-speed stability.

Understanding that customization is a key component of luxury, the TLX will feature an Integrated Dynamics System (IDS) to allow for further personalization and a sportier driving experience. The four driving modes – ECON (Economy), Normal, Sport, and a new Sport+ mode – take full advantage of the TLX's high-performance capabilities. Depending on which mode the driver selects, the Integrated Dynamics System will adjust Electric Power Steering (EPS), throttle response, SH-AWD and P-AWS control logic, transmission shift mapping, Active Noise Control settings and HVAC control in accordance with the preferences of the driver.

Also in keeping with its luxury sedan status, the TLX was designed to deliver vault-like quietness in all driving conditions, with major improvements in noise reduction through enhancements to body stiffness, body sealing and sound insulation, and the application of electronic Active Noise Control.

The TLX was designed and developed in the United States by Acura engineers working in the company's Los Angeles design studio and Raymond, Ohio new-vehicle development center. The new TLX will be produced using domestic and globally sourced parts at the company's award-winning Marysville, Ohio auto plant, which presently manufactures the 2014 Acura TL performance-luxury sedan.

For More Information
Consumer information about Acura is available at acura.com. To join the Acura community on Facebook, visit facebook.com/Acura.