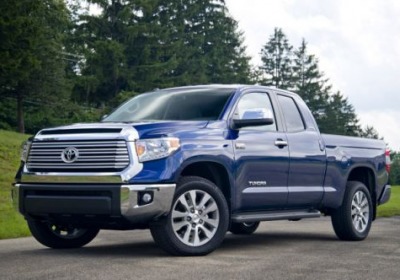 Toyota has announced pricing details for its refreshed 2014 Tundra, with the fullsize pickup offered in five grades. Naturally, that doesn't include the buyer's choice of three cab styles, the option of two- or four-wheel drive, and a choice of a 4.0-liter V6 base engine or 4.6-liter and 5.7-liter V8s.

As is typical for a model as as customizable as a pickup, Toyota's pricing structure is far from simple. Adding the 5.7-liter V8 at one trim level can cost several hundred dollars more or less than another trim level – the same goes for adding four-wheel drive. So, rather than break out the Enigma Machine to try and decipher what options cost what on which trim, we've just rolled the whole pricing chart in. Scroll down for a look, including Toyota's full press release, and then check out our recent First Drive feature of the truck.

The new Tundra is competitively priced for 2014, offered in a new five-grade strategy consisting of the hard-working SR, volume-leading SR5, the well-appointed Limited, and two premium grades: "Platinum" and the all-new "1794 Edition." Tundra is offered in three cab styles, two-door Regular Cab, four-door Double Cab and four-door CrewMax, all available in 4x2 and 4x4. Each grade is well-equipped with a vast array of key standard features for simplified ordering.

The manufacturer's suggested retail price (MSRP) on all SR5 grades equipped with a 5.7-liter V8 engine will be unchanged from equivalent volume-leading 2013 models and add $650 worth of additional standard equipment. All Limited CrewMax 4x4 models have reduced MSRP's of $2,000 from equivalent 2013 models (4x2 models reduced by $1,990).

An Array of Standard Convenience Features
Tundra features a number of key standard features, and is the only truck in the full-size pickup segment to include a standard back-up camera (viewed from the audio display screen), and standard Bluetooth® hands-free phone and audio streaming on all grades.

All Tundra models have a standard windshield wiper de-icer, front and rear mudguards, power window and door locks, and heated, power, outside mirrors. A Tow Hitch is also standard equipment on models equipped with the 5.7-liter V8 engine.

All SR and SR5 grade models come standard with air conditioning, while all Limited, Platinum and 1794 Edition models come with standard dual zone air conditioning with individual temperature settings for driver and front passenger. An auto-dimming rearview mirror with compass, and HomeLink® universal transceiver is standard on Limited, Platinum and 1794 Edition grades.

The Platinum and 1794 Edition come standard with a 12-way power driver's seat with memory and a six-way power passenger's seat, both with heat and ventilation, power moonroof, power tilt/telescopic steering wheel, front and rear parking sonar, and Entune Premium JBL Audio with Navigation and App Suite.

The 2014 Tundra is the only full-size pickup with available Blind Spot Monitor with Rear Cross Traffic Alert (available on Limited CrewMax, Platinum and 1794 Edition only).

All 2014 Tundra models will come standard with the updated next-generation Entune™ Audio systems, which feature several enhancements including a new Entune® App Suite with an array of popular apps including new additions such as Yelp and Facebook Places.

Chiseled New, Unique Exterior Designs; Distinct Look for Each Grade
Tundra is newly designed, inside and out, representing a major change since the 2007 model year. Each Tundra grade embodies a specific theme through distinct designs that go beyond badging.

The new front design integrates the hood and grille for a chiseled image. Designers increased the size of the front fascia and tightened up the surfaces and character lines to visually punctuate Tundra's pulling power and wide stance. The grille has a taller, bolder look, visually connecting the upper intake to the lower bumper. The front lower bumpers are now a three-piece design, allowing for lower replacement costs. In addition, the fenders and wheel wells have been squared-off for a wide and sturdy stance.

A new exterior design helps carry the chiseled character lines all the way down the profile, leading to a rugged new bed and tail gate, with an integrated spoiler and "TUNDRA" embossed into the sheet metal, creating a one-piece forged look. Like the front bumper, the rear bumper changes from one piece to three, for lower replacement costs.

A New Premium,Spacious Interior; Each Grade With a Unique Identity
Tundra features new contemporary interior styling focusing on differentiation between grades, while improving the availability of features most important to truck buyers. The new interior variations are thematic and cater to a specific customer with a specific budget. Ergonomic improvements include easier driver access to controls as the reach to the audio and HVAC controls was reduced by 2.6 inches. Overall passenger comfort was improved with a new front and rear (CrewMax) seat design and improved front seat ventilation. In addition, front seats have additional travel, and rear seats can now be folded up for additional cargo carrying capability while maintaining a comfortable seating back angle and lowering load height by more than 11 inches.

The interior has a rugged, interlocked construction with new instrument panel. The instrument panel features individual gauges grouped in a clear, easy-to-see design with a center-mounted multi-information (LCD) display screen. The console design holds multiple storage areas for personal items and electronics plus additional padded surfaces and accent stitching in premium grades. Both Double Cab and CrewMax are available with a bench or bucket seats for the front row.

The interior of the SR5 features a "professional gear" theme, with unique driver and passenger zones, metallic accents and bold contrasting fabric. Most importantly, the new design uses premium surface treatments such as high granulated paint on the center cluster and unique seat stitching to enhance interior quality and durability.

The Limited will be available with Black, Sand Beige and Graphite leather-trimmed interiors and will have standard dual zone auto HVAC controls.

The Platinum grade has been redesigned for the next generation of personal use truckers. It features perforated, diamond pleated premium leather seats, door and instrument panel inserts, and chrome seat and console accent badging for an upscale, yet urban feel. In addition, Platinum uses premium leather never before used on a Toyota truck.

Three Engine Options Remain Among Segment's Most Capable
Tundra continues to offer three proven powertrains that are among the best in its segment. The Tundra workhorse, and still one of the most capable and advanced engines in the full-size pickup segment, is the 5.7-liter, DOHC i-Force V8. Tundra's most popular engine with owners, it generates 381 horsepower at 5,600 rpm and 401 foot-pounds of peak torque at 3,600 rpm. The 5.7-liter is offered in both gasoline and "Flex Fuel" variants.

Several enhancements have been implemented on the 2014 Tundra to improve performance. Shock-absorber valving has been re-tuned to improve ride quality over harsh surfaces.

The Tundra SR and SR5 grades will ride on 18-inch styled steel wheels, while the Limited, Platinum and 1794 Edition will have all-new 20-inch alloy wheels specific to each grade.

Toyota believes it is important for truck owners to be able to tow with confidence. This is why Tundra has been compliant with the SAE J2807 towing standard since 2011 and remains the industry's only full-size truck to adopt the standard.

The prices for the 2014 Tundra take effect tomorrow, August 9 when the redesigned Tundra begins arriving at Toyota dealers.

Tundra MSRP's do not include the Delivery, Processing and Handling (DPH) fee of $995. The DPH for Southeast Toyota (SET) and Gulf States Toyota (GST) may vary.