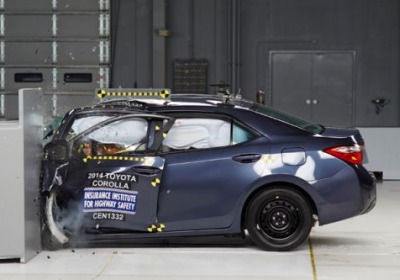 Toyota may have performed some major surgery on the 2014 Corolla, but that hasn't helped the Japanese automaker overcome tough new crash test procedures. The Corolla, Toyota's bread-and-butter compact sedan, managed only a Marginal score on the new small overlap crash test, which was just added last year.

Despite the low score, the Corolla performed well in the moderate overlap front, side, rollover and rear testing, which was enough to score it a 2013 Top Safety Pick. In testing in August, six of the Corolla's competitors earned the Top Safety Pick + award, for good or acceptable scores across the board.

According to the Insurance Institute for Highway Safety, the Corolla's "Marginal" score was down to an "intruding structure," that could cause injuries to the lower left leg. There was also concern that in a collision, the driver's head would move after hitting the air bag, and collide with the A-pillar or dash.

Take a look below for the crash test video, as well as a press release from the IIHS.

The 2014 Toyota Corolla, a small car redesigned for the 2014 model year, earns a marginal rating for performance in the IIHS small overlap front crash test.

Structural performance was poor and the driver's space was seriously compromised by intruding structure. Measures from the dummy indicate that injuries to the left lower leg would be possible in a real-world crash of this severity. The dummy's head contacted the front airbag but rolled to the left as the steering wheel moved 4 inches to the right. That left the head vulnerable to contact with forward structures like the windshield pillar and dashboard. The side curtain airbag deployed and had sufficient forward coverage to protect the head from contact with forward side structure like the roof rail and interior door panel and outside objects.

The Institute in August released results for 12 other small cars but didn't test the Corolla because the redesigned model was about to be released. If design changes are imminent, the Institute delays tests to ensure that IIHS ratings don't soon become obsolete. The practice also encourages automakers to improve designs more quickly.

In the earlier tests of the small cars, half earned a good or acceptable rating for occupant protection in a small overlap crash and qualified for the IIHS TOP SAFETY PICK+ designation. Six other small cars earned marginal or poor ratings.

The Institute added the small overlap test to its lineup of vehicle safety evaluations last year. It replicates what happens when the front corner of a vehicle strikes another vehicle or an object like a tree or a utility pole. In the test, 25 percent of a vehicle's front end on the driver side strikes a 5-foot-tall rigid barrier at 40 mph. A 50th percentile male Hybrid III dummy is belted in the driver seat.

The Corolla currently qualifies for the 2013 TOP SAFETY PICK award, without the +, for good ratings in the Institute's four other tests – moderate overlap front, side, rollover and rear.