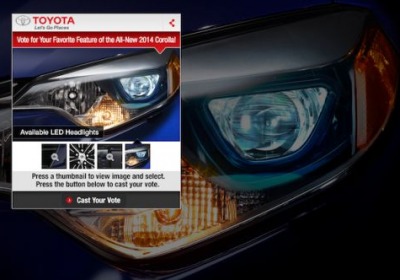 Here's what we know about the redesigned 2014 Toyota Corolla: It will have "aggressive new styling" with "available seventeen-inch alloy wheels" an "available touch screen audio" system and "available LED headlights."

We know all of this because Toyota has seen fit to release a small assortment of teaser images of the 2014 Corolla, with those descriptions attached. The latest to hit the web shows LED lighting clusters, which, to Toyota's credit, don't appear to merely mimic designs already seen in the automotive world.

We should point out that the headlights do share a link to the units seen on the Furia Concept that was supposed to foreshadow the next Corolla, though the most interesting bits – namely the honeycomb inner pattern – have been chucked while the somewhat trapezoidal main units remain intact.

Check out all four 2014 Toyota Corolla teasers in our image gallery above, and stay tuned for the live reveal on Thursday.