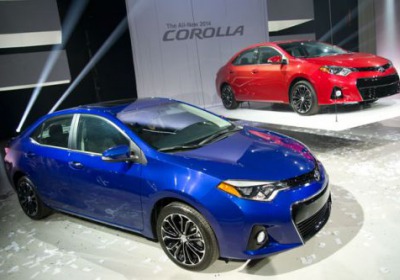 After months of leaked photos and speculative reports, Toyota finally unveiled its 2014 Corolla to the world in early July at a star-studded California party. The confetti has been swept up and the champagne flutes washed and stored, and now the real work can begin: production. Toyota has announced that its new C-segment player has begun rolling off the lines at its plants in Mississippi and Ontario, Canada this week ahead of the planned start of sales in September. What's more, the refreshed 2014 Tundra pickup has also segued into production in San Antonio, Texas.

Corolla production in Mississippi is still a relatively recent phenomenon, with the plant having begun assembly of the outgoing model in the fourth quarter of 2011, while Toyota's Cambridge, Ontario plant has been churning out the compact volume king since 1988. Conversely, the Tundra has been in production at the Texas facility since 2006, and Toyota projects that the plant will build its milestone one-millionth new vehicle in September, right around the time the reworked fullsize pickup goes on sale.

With nearly 40 million units sold, the Toyota Corolla is the best-selling car nameplate in the world, and this year marks its 47th year on the market. The 2014 Corolla will be available for sale in September.

The Mississippi plant initially began production of Corolla in November 2011 further advancing the company's efforts to design, develop and build vehicles where they are sold. TMMMS has the annual capacity to produce 160,000 vehicles and employs nearly 2,000.

Building the Corolla is truly an effort by Toyota team members all across North America. Corolla engines are built in Buffalo, W. Va., engine plant. Cylinder heads and blocks for those engines are produced at both of Toyota's Bodine Aluminum castings plants, located in Troy, Mo., and Jackson, Tenn.

The Mississippi plant will mark the start of production with a Team Mississippi Appreciation Day for team members, supplier team members and their families on September 7 at the BancorpSouth Arena in Tupelo, Miss.

Toyota's Cambridge, Ontario plant has produced Corolla for 25 years - since 1988. TMMC also builds Lexus RX350, RAV4, RAV4 EV, and produces Matrix for the Canadian market. Annual capacity for the plant is 470,000 vehicles and it employs approximately 7,000.

2014 Tundra production underway
The start of production for the 2014 Tundra was celebrated this week by team members at Toyota Motor Manufacturing, Texas, Inc. (TMMTX).

The 2014 Tundra was redesigned, inside and out, representing the first major change since the launch of the current generation for the 2007 model year. The Tundra was completely engineered by Toyota Technical Center in Ann Arbor, Mich., and designed by Calty Design Research centers in Newport Beach, Calif., and Ann Arbor. The Toyota Tundra is built exclusively in San Antonio, Texas with 75 percent North American content. The 2014 Tundra will be available for sale in September.

Tundra production at Toyota's Texas plant initially began in November 2006. The plant also builds the Tacoma and has the annual capacity to produce 200,000 trucks. More than 2,800 team members are employed at TMMTX.

Toyota's Huntsville, Ala., engine plant is supplying all engines for Tundra production. Cylinder heads and blocks for those engines are produced at both of Toyota's Bodine Aluminum castings plants, located in Troy, Mo., and Jackson, Tenn.

This September, the Texas plant will mark its 1 millionth vehicle built and then in October, will celebrate the 10 year anniversary of the plant's groundbreaking.