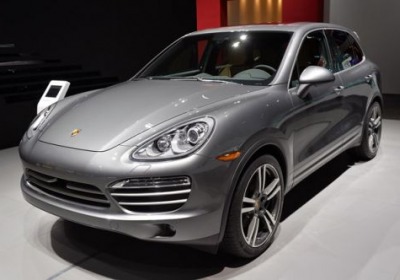 If there's one automaker that certainly doesn't skimp on the special edition models, it's Porsche, and here at the 2014 Detroit Auto Show, we're getting our first look at yet another unique take on one of the company's most popular models. It's called the Cayenne Platinum Edition, and while many special models build off of higher-trim vehicles, this one adds a bit of flair to the most basic version of the luxury SUV.

The Platinum Edition is available on Cayennes with the base 3.6-liter V6 or the 3.0-liter turbodiesel V6. Platinum models are set apart from other models with the addition of silver exterior accents on the grilles, window trim and rear spoiler, as well as the two-tone, black-and-beige interior scheme. It also comes standard with the eight-speed Tiptronic S transmission, Power Steering Plus, Park Assist, the Convenience Package and Bose audio.

The cost of entry? $63,000 for the naturally aspirated Cayenne or $66,900 for the diesel. That's a full $13,000 more than the base model, but Porsche says it's actually a bargain as opposed to selecting all of those options individually. Have a look below for Porsche's official release.

Atlanta. Porsche is offering a special edition Cayenne series called the Platinum Edition. Based on the Cayenne and Cayenne Diesel models, the Platinum Editions offer many of the most-requested options as standard. Externally, the special status of these models is demonstrated by the exterior detail accents in Platinum Silver Metallic, with an exclusive two-tone standard interior in Black Luxor Beige. The two new Platinum Edition models are on sale now and will be available in the U.S. starting January 2014.

Accents painted in Platinum Silver Metallic include the center and side air intake grills, the side window trim, the rear lip spoiler and the lower tailgate trim. The standard colors include monotone paint finishes in Black and White, while Meteor Grey Metallic, Basalt Black Metallic and Mahogany Metallic are available as additional extra cost color options. Available exclusively for this Cayenne edition is the Carrara White Metallic paint finish. The Platinum Edition exterior is completed with 19 inch Cayenne Design II wheels with colored crest.

The Black Luxor Beige two-tone interior combination is also reserved for these special edition models. Partial leather interior is standard, while a full leather interior is available as an option. The SportDesign steering wheel with paddle shifters, embossed headrests and floor mats with Luxor Beige edging plus front door entry guards with the "Platinum Edition" script put the finishing touches on the interior.