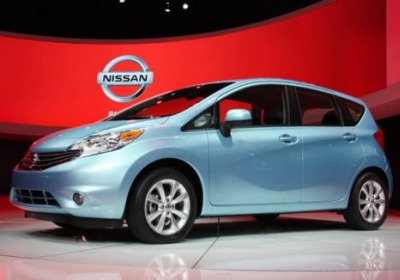 With the 2014 Nissan Versa Note going on sale this month, Nissan has announced the official pricing for its redesigned subcompact hatchback. Commanding a $2,000 premium over the Versa sedan, the new Versa Note will have a starting price of $13,990 (*not including $790 for destination), which is $680 less than the 2012 Versa Hatchback.

The base model is the Versa Note S, but trim levels also include S Plus and SV starting at $15,240 and $15,990, respectively. The S Plus trim will deliver the highest fuel economy – best in class according to Nissan – for the Versa Note thanks to a CVT and active grille shutters, and the SV brings more convenience features like power windows and door locks (that's right, the base models will still get crank windows and manual door locks). Stepping up even further, the SL Package will add push-button starter, backup camera and heated seats for $17,690 while the SL Tech Package tops out at $18,490 with navigation, Nissan's Around View Monitor and Bluetooth. More pricing details for the 2014 Versa Note are posted below in the official press release.

NASHVILLE, Tenn. - The 2014 Nissan Versa Note, which goes on sale this month at Nissan dealers nationwide, is more than just the fourth all-new product to appear in Nissan showrooms in recent months - following the redesigns of Altima, Pathfinder and Sentra. It is also the dynamic next-generation of the vehicle that, combined with Versa Sedan, held the entry segment sales leadership for 20 consecutive months and 38 of the last 44 months.

The dynamic new styling, interior versatility and advanced technology of the Versa Note hatchback are expected to strengthen Nissan's leadership in this critical segment of the U.S. car market. The all-new Versa Note offers a starting Manufacturer's Suggested Retail Price (M.S.R.P.*) of just $13,990 USD for the 2014 Nissan Versa Note S - which is $680 USD less than the outgoing Versa Hatch S M/T.

The all-new Versa Note joins the second-generation Versa Sedan (introduced in 2012) in the Nissan lineup, bringing its own distinct look, feel and hatchback utility. It adds the global Note designation for the new generation design, along with an extensive list of key features such as: