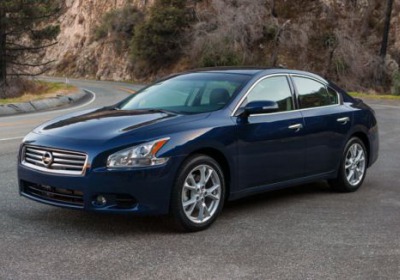 With a new Maxima expected to debut next year for the 2015 model year, Nissan is only making small changes to its big sedan for 2014. Buyers looking to get behind the wheel of Nissan's "4-Door Sports Car" will be happy to know that the base price for the 2014 Maxima carries over from 2013 starting at $31,000 (*excluding the $810 destination charge).

Aside from two new colors, the only change to the base Maxima S is the addition of a new option group. Sounding very similar to the Sport Package available on the SV, the $750 Limited Edition Package adds smoked Xenon headlights, dark-accented 18-inch wheels, a rear spoiler and fog lights. Stepping up to the SV trim level, the Maxima now comes standard with a rearview camera, Xenon headlights and a seven-inch screen, but its price has also been increased by $850, so it starts at $34,090. Scroll down for more info on the 2014 Maxima.

Enhancements for the 2014 model year include:

About Nissan North America
In North America, Nissan's operations include automotive styling, engineering, consumer and corporate financing, sales and marketing, distribution and manufacturing. Nissan is dedicated to improving the environment under the Nissan Green Program and has been recognized as an ENERGY STAR® Partner of the Year in 2010, 2011, 2012 and 2013 by the U.S Environmental Protection Agency. More information on Nissan in North America and the complete line of Nissan and Infiniti vehicles can be found online at www.NissanUSA.com and www.InfinitiUSA.com, or visit the Americas media sites NissanNews.com and InfinitiNews.com.

About Nissan
Nissan Motor Co., Ltd., Japan's second-largest automotive company, is headquartered in Yokohama, Japan, and is part of the Renault-Nissan Alliance. Operating with more than 236,000 employees globally, Nissan sold more than 4.9 million vehicles and generated revenue of 9.6 trillion yen (USD 116.16 billion) in fiscal 2012. Nissan delivers a comprehensive range of over 60 models under the Nissan and Infiniti brands. In 2010, Nissan introduced the Nissan LEAF, and continues to lead in zero-emission mobility. The LEAF, the first mass-market, pure-electric vehicle launched globally, is now the best-selling EV in history.

See also: Nissan won't downsize the next Armada, Nissan applies for 'R-Hybrid' trademark, but what is it for?, Nissan promising autonomous car production by 2020.