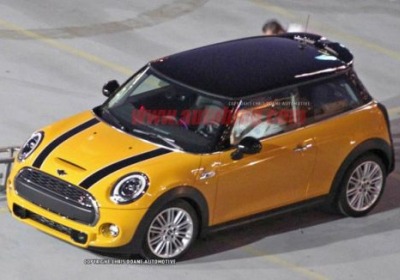 Here it is, all but undisguised. We've been clocking the 2014 Mini Cooper for months now, but engineers' well-placed camouflage has meant that our views have been very limited. Today, though, the disguises have been cast aside and the new Mini has been revealed in both standard and Cooper S form during a photo shoot, and there are some real surprises afoot.

For one, we had no idea that the Cooper would adopt the LED daytime running lamp corona headlamps from the much-loved 2011 Rocketman concept, but there they are, looking both unique and a little frightened. The front grille has been resculpted and and is now more rounded, integrating the bumper strike face in matte black. In fact, the entire nose looks a bit more rounded to our eyes, with all variants carrying a small but noticeable power bulge (shown here on the S model above the intake slot in the hood). The profile looks largely unchanged save for a slightly faster windshield, but the rear picks up a set of oversized taillamps that we'll likely have to see in person to get comfortable with. Our spy shooters tell us that the 2014 Cooper, codenamed F56, appears to be slightly larger in the metal than its predecessor, as expected, with much of that length coming in the form of a longer front overhang (perhaps to assist with pedestrian safety regulations).

Expected to ride atop the same UKL architecture shared with the upcoming BMW 1 Series GT and MPV, the entire line of Coopers may move to an all three-cylinder lineup, including BMW's 1.5-liter I3 that features a twin-scroll turbo, direct injection and variable valve timing, a combination good for anywhere between 120 to 200 horsepower. Eventually, higher-performance models could generate up to 300 horsepower out of this tiny engine. Our well-connected lensmen suggest that at least one four-cylinder engine might carry over to the launch of this new generation, but it may only be available for the first model year.