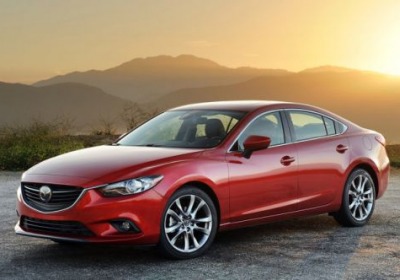 Ring one up for Mazda. The Japanese brand's midsize offering, the Mazda6, has been named Popular Mechanics' Car of the Year. The 6 received a comprehensive reworking for the 2014 model year that saw it adopt sleek, sexy sheet metal; a clean, logical interior; and powertrain technologies that allow it to net some of the best fuel economy available in a gas-powered, non-hybrid sedan.

Popular Mechanics praised the 6's Skyactiv 2.5-liter, 184-horsepower engine, as well as its agility and responsiveness during testing. It also remarked on the functional, but well designed cabin, and the degree of available technology.

"To be named Car of the Year by a publication as esteemed as Popular Mechanics is as flattering as it is humbling," said Mazda's president and CEO, Jim O'Sullivan.

2014 MAZDA6 NAMED 'CAR OF THE YEAR' BY POPULAR MECHANICS

"To be named 'Car of the Year' by a publication as esteemed as Popular Mechanics is as flattering as it is humbling," said Jim O'Sullivan, president & CEO, Mazda North American Operations (MNAO). "And the continued success of the 2014 Mazda6 is a testament to the brand's 'clean slate' approach, where everyone from every team – R&D and design to strategy and marketing – rolled up their proverbial sleeves to answer the question 'If we could start all over, what can we do better?' We believe in 'One Team, One Mazda' and it is a proud honor to share this accolade with the entire global Mazda family."

After a year of test driving the latest automotive offerings, PM's automotive editors and contributors judged vehicles and selected the Car of the Year for its overall excellence and their top 10 choices by segment. The Car of the Year is the vehicle that best exemplifies qualities that are most important to Popular Mechanics readers: affordability, utility, fuel efficiency, performance, innovation and bold design. The SKYACTIV family of engines garnered an Automotive Excellence Award last year in the "Technical Innovation" bonus category.

"At Popular Mechanics, we love it when bold engineering and great design come together," said Jim Meigs, editor-in-chief, Popular Mechanics. "The Mazda6 really impressed us with how well it delivers so many things modern car owners want: great mileage, fun road-handling, upscale features and looks – and remarkable value."

Available in three trim levels – Sport, Touring and Grand Touring – all Mazda6 vehicles are currently fitted with a SKYACTIV-G 2.5-liter gasoline engine, which can be paired with a choice of transmissions: the SKYACTIV-MT six-speed manual or SKYACTIV-Drive six-speed automatic. Featuring the lean, muscular character lines of the KODO "Soul of Motion" design language, the 2014 Mazda6 touts 184 horsepower at 5,700 rpm and 185 lb-ft of torque at 3,250 rpm.

Shapely and sophisticated, Mazda6 also offers a best-in-class coefficient of drag as low as 0.26 (Grand Touring only) as well as an impressive EPA-rated fuel efficiency of 25 city/37 highway/29 combined MPG when equipped with the standard manual transmission. Automatic-equipped vehicles see fuel economy increased to an EPA-estimate rating of 26 city/38 highway/30 combined. When coupled with i-ELOOP, which is part of the Technology Package (Grand Touring only), fuel economy is a best-in-class EPA rating of 28 city/40 highway/32 combined MPG.

The SKYACTIV-D 2.2L engine is expected to go on sale in North America in late spring of 2014. Final specifications and packaging information of the diesel engine and trim combinations will be announced closer to its on-sale date.

Named a 2013 Top Safety Pick+ by the Insurance Institute for Highway Safety (IIHS), the all-new i-ACTIVSENSE suite of safety technologies utilizes sensing devices such as milliwave radars and cameras to support the driver in recognizing hazards, avoiding collisions and minimizing damage, should accidents occur. While these systems will not eliminate accidents, their intent is to minimize them and reduce the severity of a crash. Safety features vary by trim level.

1 SKYACTIV is a registered trademark of Mazda Motor Corporation (MC).

See also: Mazda doubles down with a pair of Threes, Mazda hits Vegas with a pair of Sixes, Tow truck driver hilariously bad at righting a flipped Mazda.