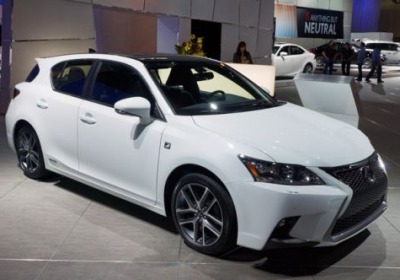 Earlier today, Lexus officially took the wraps off its 2014 CT 200h at the Guangzhou Motor Show, and now we've gotten a chance to inspect the updated hybrid hatchback right here at the LA Auto Show.

As expected, the most prominent change made to the CT's styling is the addition of Lexus' signature spindle grille. Additional changes include new wheel options and revised front and rear fascias, but our favorite update to the car is to the headlights, where there is no longer a gap in the middle of the LED running lights. The luxury hatchback has also received some changes to the cabin, including an updated instrument gauge cluster, a new fixed nav screen that replaces the previous folding unit and a freshened combination of cabin materials.

No changes have been made to the CT's hybrid powertrain, meaning the model will carry on with a 134-horsepower 1.8-liter Atkinson-cycle four-cylinder paired with a drive motor and an electronic continuously variable transmission. Fuel economy ratings likely won't stray too much from the 2013 model's 43 miles per gallon city and 40 mpg highway ratings.

The motivational force may not have change, but Lexus has stiffened up the CT's chassis and fine-tuned its suspension and aerodynamics in the name of reducing noise, vibration and harshness (NVH) levels. As with the current model, there will still be an F Sport offering, and in addition a more aggressive look, it will also maintain its firmer suspension. There is still no indication as to when the 2014 CT will go on sale or how much it will cost – the current car starts at around $32k – but the full press release and a short video with more details be found below.

The new CT 200h is available in a choice of six body colors including an all-new Lexus red. A Lexus first, a sporty black roof is available with six color schemes to provide a unique two-tone look. All exterior paint now benefits from a scratch-resistant, self-restoring top coat.

Refined Interior Design and Upgraded Equipment
The 2014 CT 200h interior has been refined to offer enhanced levels of equipment and improved visual and tactile quality.

The driver benefits from a new, 14.6-inch diameter steering wheel. The Optitron instrument panel is now available with a 4.2-inch TFT (Thin Film Transistor) screen which may be linked to the multimedia system and controlled via steering wheel-mounted switches.

The sound quality of the Lexus audio system has been enhanced by the adoption of the world's first bamboo loudspeaker technology. Bamboo fiber, plant opal and charcoal are combined in an injection molding process to create the industry's thinnest loudspeaker diagram, which results in noticeably improved sound quality.

Additional equipment upgrades include the availability of rear view and backup monitors for the LDA system, as well as Intuitive Parking Assist, a Tire Pressure Warning system and a Traction Control "Off" switch.

Body rigidity has been improved through additional spot welding and the extensive use of structural adhesive technology.

Complementing the inherent quietness of the Lexus Hybrid Drive powertrain, more than 94 separate measures have been adopted to further reduce NVH. A Lexus hybrid first, a new inlet duct design realizes both excellent intake efficiency and a high level of quietness.

Distinctive F SPORT Design
The 2014 CT 200h F SPORT has been designed with a more powerful road presence, to give it a stronger differentiation from the standard CT 200h.

A new spindle grille design features the same aggressive mesh pattern as that of the new IS F SPORT, which is reversed between the upper and lower sections. The fog lamp housings share the same mesh finish, and are underscored with a fin also finished in black.

To the rear, an exclusive roof spoiler features cut-outs to provide additional downforce for even greater grip and stability.

In addition to its alluring style the CT 200h has one of the best EPA-estimated fuel economy ratings in its segment with a combined rating of 42 mpg, 43 mpg city and 40 mpg highway.