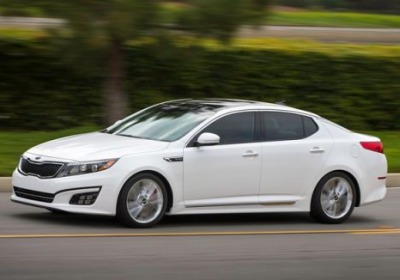 Kia is showing off a slew of vehicles here in New York, including the ever-so-slightly refreshed 2014 Optima sedan you see here. The brunt of the changes surround the new front fascia, with repositioned LED lighting above the headlamp units and some new quad-LED fogs rounding of a touched-up front bumper. At the rear, Kia has reworked the taillamps, and of course, LEDs are found there, as well.

Other changes to the Optima for 2014 include the additions of two new displays inside the cabin – a 4.3-inch TFT display in the gauge cluster and a larger, eight-inch high-resolution screen that houses the navigation and infotainment data. There are also new seats inside the Optima, which are hopefully more comfortable and offer better bolstering than the decidedly flat chairs found in the current car, plus Kia has added available new safety features like blind spot monitoring and cross-traffic alert.

The powertrain offerings have not changed for 2014 – base cars still get a naturally aspirated 2.4-liter engine while the SX models get the 2.0-liter turbo. There is, however, a new Drive Mode Select system specifically for the SX, which adjusts transmission shift points and steering weight for a more engaging dynamic, or so we're told. (The Optima Hybrid model did receive upgrades to its battery and electric motor just recently, but those changes technically hit during the 2013 model year – it is not immediately clear if the gas-electric model will receive the updates shown here).

We'll have plenty more images of the refreshed Optima in short order, so stay tuned. In the meantime, have a look below for Kia's press blast.

NEW YORK, March 27, 2013 – Kia Motors America (KMA), one of America's fastest-growing car companies over the last five years , unveiled a significantly updated version of its best-selling Optima mid-size sedan today at the 2013 New York International Auto Show (NYIAS). Just three years ago, Kia turned the automotive world on its head when the Peter Schreyer-penned Optima mid-size sedan was unveiled at the 2010 NYIAS. Since that time, Optima has become Kia's sales leader, selling more than 150,000 units last year and gaining worldwide acclaim for its European-inspired design and fun-to-drive performance. The 2014 Optima, built in the U.S.* at Kia's West Point, Ga., facility (KMMG), arrives with updated front and rear fascias, retaining the vehicle's dynamic and sporty proportions. Available in LX, EX, SX and SX-Limited trims, the Optima's new premium amenities and convenience options make Optima an impressive player in the competitive mid-size sedan segment. The 2014 Optima is expected to arrive in Kia retail showrooms in the third quarter of the year, and pricing will be announced closer to the vehicle's on-sale date.

"With the latest version of the Optima, Kia continues to advance value to new levels of sophistication, offering mid-size sedan consumers new premium amenities and convenience upgrades, as well as a refinement of the world-class design that so completely transformed our brand," said Michael Sprague, executive vice president, marketing & communications, KMA. "The Optima is the cornerstone of Kia's design evolution and epitomizes the brand's goal of building highly-captivating, value-positioned vehicles."

* The Sorento and Optima GDI (EX Trims and certain LX Trims only) and GDI Turbo are built in the United States from U.S. and globally sourced parts.

Improvement of an Already Iconic Design

In a mid-size sedan segment long dominated by function over desirability, the 2014 Optima cements the model's status as a trailblazer of combining style and substance in an affordably priced vehicle. Refining the Optima's sculpted, high-end appearance, Kia's Frankfurt-based design team improved the vehicle's front and rear fascias and the brand's signature tabbed grille. The vehicle's bold stance and aerodynamic shape are further accentuated by updated rear diffusers and a sweeping trunk lid. Lighting up the European-inspired design are striking front LED positioning and fog lights, along with clear, newly designed LED rear lamps.

Kia: One of the World's Fastest Moving Global Automotive Brands

Kia Motors America is one of only three auto brands to increase U.S. sales in each of the past four years, and in 2012 the company surpassed the 500,000 unit mark for the first time. With a full line of fun-to-drive cars and CUVs, Kia is advancing value to new levels of sophistication by combining European-influenced styling – under the guidance of chief design officer Peter Schreyer – with cutting-edge technologies, premium amenities, affordable pricing and the lowest cost of ownership in the industry. Kia recently joined the exclusive ranks of Interbrand's "Top 100 Best Global Brands," and is poised to continue its momentum with seven all-new or significantly redesigned vehicles scheduled to arrive in showrooms in 2013. Over the past decade Kia Motors has invested more than $1.4 billion in the U.S., including the company's first U.S. assembly plant in West Point, Georgia – Kia Motors Manufacturing Georgia – which is responsible for the creation of more than 11,000 plant and supplier jobs. The success of the U.S.-built* Optima and Sorento in two of the industry's largest segments has fueled Kia's rapid growth and is complemented by Kia's comprehensive lineup which includes the Soul urban passenger vehicle, Sportage compact CUV, Optima Hybrid, the Forte sedan, 5-door and Koup compacts, Rio and Rio 5-door sub-compacts and the Sedona minivan.