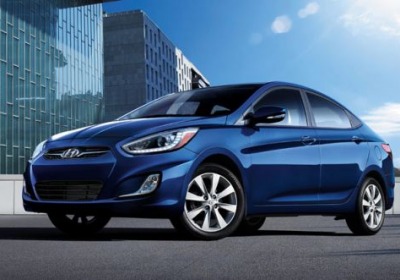 Integrated blind-spot mirrors are hardly a luxury item, but they're one of the simplest yet most welcome equipment developments we've seen in some time, and we're glad to see them beginning to spread throughout the industry's offerings. The 2014 Hyundai Accent is the latest car to get them, along with a host of other new features.

Chief among the changes to Hyundai's entry-level offering are new projector headlamps that combine LED accents with a welcome-light function, along with an available B&M Racing sport shifter on the five-door SE hatchback. Other small-but-useful standard-equipment updates include triple-flash turn signals and sliding sun visors, while uplevel SE models are treated to a tilt/telescope steering wheel, updated audio system with improved ergonomics and voice recognition, auto-up driver's side window and the aforementioned upgraded projector headlamps.

Mechanically speaking, the Accent appears unchanged, with the sole engine offering consisting of Hyundai's well-regarded 1.6-liter Gamma four-cylinder delivering 138 horsepower and 123 pound-feet of torque to go along with its fuel economy ratings of 27 miles per gallon city and 38 highway.

2014 ACCENT UPDATES AT A GLANCE

Accent's product success has received attention from automotive and industry experts, being awarded various coveted awards and accolades since its reveal. Along with two designations from Ward's AutoWorld in 2012, Accent was the highest rated subcompact sedan by a leading enthusiast magazine, above Chevrolet Sonic, Honda Fit and Toyota Yaris. This year, it won its second consecutive MotorWeek Driver's Choice Award for Best Subcompact Car.

ADVANCED TECHNOLOGY FOR SUPERIOR FUEL ECONOMY
Selected as one of Ward's 10 Best Engines in 2012, the Accent's all-aluminum 1.6-liter Gamma four-cylinder engine features the latest innovations in engine technology to deliver an unsurpassed 138 horsepower and 123 lb-ft of torque and 27 mpg city and up to 38 mpg highway EPA-estimated fuel economy rating.

The engine's most notable feature is its use of Gasoline Direct Injection (GDI), the first car with GDI technology in the subcompact category. By precisely controlling the injection of fuel, GDI allows for better fuel economy, increased power and reduced emissions. The application of Dual Continuously Variable Valve Timing (D-CVVT) on both intake and exhaust camshafts allows for increased efficiency, improved fuel economy and reduced emissions. Other elements resulting in reduced fuel consumption include an Alternator Management System, an offset crankshaft design, variable induction system and electronic throttle control. To reduce lifetime operation costs and increase reliability, the Gamma features a maintenance-free silent roller timing chain and innovative anti-friction coatings such as a CrN Physical Vapor Deposition (PVD) coating..

Several systems in the Accent contribute to optimal fuel efficiency. The vehicle can be equipped with an available six-speed manual or automatic with SHIFTRONIC manual control, delivering smooth and efficient power delivery. Low-rolling resistance silica tires and a slippery shape (0.30 cd) reduce friction with the road and the air. This aerodynamic shape also includes a kicked up trunk edge, wheel arches which shield the tires and an optimized engine undercover. Finally, the Active ECO system modifies engine and transmission control to smooth out throttle response. By turning on the Active ECO system, drivers can realize up to a seven percent increase in fuel economy.

Low Curb Weight
Despite the additional content, safety features and technology packed into the 2014 Accent, Hyundai has avoided the typical associated penalty of increased weight. A low curb weight corresponds to an improvement not only in fuel economy but all other dynamic areas. In fact, Accent by far offers the best power-to-weight ratio in its class, providing drivers with both low fuel consumption and responsive performance. Highlights that contribute to a low curb weight include the 1.6-liter Gamma GDI engine with aluminum block, monotube shock absorbers, integrated parking brake and a super-flat torque converter.

SAFETY
A long list of safety features is included as standard equipment on all 2014 Accent models. A total of six airbags help protect occupants in the event of a collision, including two front impact airbags, two front seat-mounted side impact airbags, and curtain side-impact airbags for front and rear passengers. Accent's standard front-seat active head restraints help prevent whiplash by automatically reducing the space between a front occupant's head and the head restraint during certain rear collisions and are highly recommended by organizations such as the Insurance Institute for Highway Safety (IIHS). Active front head restraints are not available on Fiesta or Mazda2.

Collision Load Dispersion
The Accent's structure distributes the force of an impact to help maintain the integrity of the cabin. Electronic Stability Control (ESC) and Traction Control work together to help deliver confident handling in virtually all conditions. Vehicle Stability Management (VSM) integrates control of the ESC and motor-driven power steering (MDPS) to provide handling assistance in slippery conditions or in sudden cornering scenarios. The system can deliver counter-steering when required to help assist the driver in maintaining control of the vehicle.

SMALL ON THE OUTSIDE, BIG ON THE INSIDE

All Accents ride on a 101.2 inch wheelbase, 2.8-inches longer than the previous generation. The Accent 4-door's overall length has increased by 3.5 inches to 172 inches. Total length of the new five-door version is 162 inches. As a result, Accent enjoys superior interior volume and passenger space. While the car's exterior dimensions are consistent with those of traditional subcompacts, Accent is classified by the EPA as a compact sedan thanks to its interior volume. Toyota Yaris and Ford Fiesta are classified as subcompact cars. In addition, the Accent five-door has more cargo capacity than the Nissan Juke. The Accent has best-in-class front and rear shoulder room, and the five-door also has more cargo volume than many of its compact five-door competitors.

Convenient storage spaces are included throughout the cabin, including bottle holders in the front doors and a storage tray at the base of the center console. A sliding armrest storage console is available, which is a segment first. Split and fold 60/40 rear seats are standard for increased cargo flexibility when transporting longer items. Not only does Accent have multiple storage areas, but it delivers more useable storage capacity while keeping an attractive appearance. Ward's AutoWorld took notice of Accent's thoughtful interior design, placing it on their 10 Best Interiors list in April 2012.

All Accents have column-mounted, motor-driven electric power steering that adjusts to changing driving conditions while improving fuel economy over a conventional steering system. Accent's turning diameter of 34.1 feet is better than Versa, Fiesta and Fit. The SE five-door model has a unique steering calibration for a sportier feel.