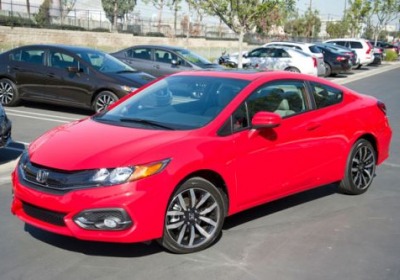 Honda lifted the covers off its refreshed Civic Coupe at SEMA earlier this month, showing off its updated styling and redesigned 18-inch wheels, but didn't unveil its interior or mechanical upgrades until today at the LA Auto Show. Eager to show off its latest arrival, Honda allowed me to check out and drive the new coupe a few weeks ago.

The interior, which was hidden beneath heavily tinted glass at SEMA, features new colors, upgraded seating materials and new technology. The interior themes are now more color coordinated and feature upgraded Tricot soft weave. Black is the standard interior color, with a choice of black or gray seats. A new display audio system is also found on the EX/EX-L trims. The seven-inch capacitive-touch screen, with a matte finish to reduce the annoyance of greasy fingerprint marks, allows users to not only tap once for a function, but to double-tap, slide, flick and pinch - as if they are using a familiar smartphone or tablet. The new infotainment interface not only accepts USB and Bluetooth data exchange, but has also been configured with HDMI for future upgrades. Some of you may have also noticed the exterior mirrors on the SEMA car, as they were fitted with cameras for Honda's blind spot minimizing Lanewatch system. It is now offered on the Civic Coupe for EX trims and above.

Mechanically, the new Civic Coupe rides on an upgraded suspension system that features revised spring rates (front up by four percent, rear up by three percent), a stiffer rear stabilizer (up by 25 percent) and larger 16-inch wheels (wearing 205/55R16 tires). The engineering objective was to improve handling and responsiveness while flattening cornering. According to Honda, the tweaks should give the Civic Coupe better linear steering feel than either the Hyundai Elantra or the Ford Focus.

The most significant upgrade is with the transmission, as Honda has fitted the Civic Coupe with an improved continuously variable transmission (CVT). The new belted gearbox promises improved fuel economy thanks to wider ratios (up 22 percent) and reduced friction. It is also lighter (by 12.5 percent) and its driver interface has been enhanced with the automaker's G-Design Shift control system. The new CVT should give better throttle response and a more linear feel to acceleration. Wheel-mounted paddle shifters (EX and EX-L trims) work in D-range and S-range, the latter simulating a seven-speed gearbox. Lastly, Honda has bumped the output of the 1.8-liter four-cylinder slightly to 143 horsepower and 129 pound-feet of torque (from 140 horsepower and 128 pound-feet of torque) with the help of an exhaust system refinement.

I spent about 15 minutes in the updated and upgraded Civic, driving a big urban loop in Torrance, California where Honda has its North American headquarters.

See also: Honda S660 Concept portends a new kei car for 2015, Honda Vezel is the Fit crossover we've been waiting for, Watch this LSR Honda Insight crash at 190 mph in the desert.