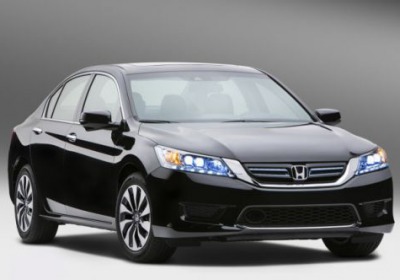 Honda has announced pricing for the new, 50-mile-per-gallon 2014 Accord Hybrid today, with three trims – Hybrid, Hybrid EX-L and Hybrid Touring – for owners to choose from. Prices for the base car start at $29,155, while the mid-range model will run $31,905. The top-of-the-line Touring trim starts at $34,905. Prices do not include the *$905 destination charge.

Regardless of which model is chosen, Accord Hybrid owners will be able to net 50 mpg in the city and 45 on the highway, numbers that compare favorably with the Ford Fusion Hybrid (47/47 mpg) and the Toyota Camry Hybrid (43/39). The Accord does cost a bit more than the competition, but if out-and-out fuel economy is your goal, the Honda wins based on these numbers.

It's also notable how much Honda was able to trim off the Accord Hybrid's price when compared to the Accord Plug-In. That car starts at $39,780, meaning the Hybrid variant is over $10,000 less, while matching that PHEV's 47-mpg combined rating. Take a look down below for the official press release from Honda.

09/23/2013 - TORRANCE, Calif.
Well-equipped Accord Hybrid offered in three grades
Loaded with premium standard features including LaneWatch™, rearview camera, and LED DRL lighting
Highest EPA-rated city mpg of any 4-door sedan in America
Fuel prices can be scary, but the EPA-rated 50 mpg1 city 2014 Accord Hybrid will take some of the fright out of going to the gas pump when it debuts at U.S. dealers nationwide on Halloween (October 31). With a host of standard equipment, the manufacturer's suggested retail price (MSRP) ranges from $29,155 for the well-equipped Accord Hybrid to $34,905 for the luxurious Accord Hybrid Touring model, plus a destination and handling charge2 of $790.

"With advanced technologies standard on every Accord Hybrid we've given customers an incredible combination of fuel efficiency, technology and value," said John Mendel, executive vice president of sales at American Honda. "The addition of the Accord Hybrid to the lineup will further advance Accord's position as America's most popular passenger car with individual buyers."

The Accord Hybrid EX-L is equipped with advanced safety technologies such as Forward Collision Warning (FCW) and Lane Departure Warning (LDW) along with leather-trimmed and heated front seats and the HondaLink™ cloud-based media and connectivity system featuring Aha® compatibility. Power driver's seat memory, front passenger seat with 4-way power adjustment and one-touch moonroof are also standard on the EX-L trim.

With EPA fuel-economy ratings1 of 50 mpg city / 45 mpg highway / 47 mpg combined, the 2014 Accord Hybrid is the top rated 4-door sedan in America in the EPA city cycle. Highlighting both form and function, it blends the sophisticated exterior styling and spacious interior packaging of the Accord Sedan with a highly efficient two-motor hybrid system from Honda's Earth Dreams™ Technology advanced powertrain series.

The 2014 Honda Accord Hybrid is the first Honda hybrid vehicle produced in Ohio, at the company's Marysville Auto Plant, and joins the Greensburg, Indiana-built Civic Hybrid as the second Honda hybrid model built in the U.S., using domestic and globally sourced parts. Honda invested $18.8 million in a 94,000-square-foot expansion of the Marysville Auto Plant, along with the addition of 50 new full-time jobs to handle the special processes specific to the production of this advanced hybrid model.

1Based on 2014 EPA mileage ratings. Use for comparison purposes only. Actual fuel mileage will vary depending on driving conditions, how the vehicle is driven and maintained, lithium-ion battery age/condition, and other factors.

® The Bluetooth word mark and logos are owned by Bluetooth SIG, Inc., and any use of such marks by Honda Motor Co., Ltd is under license.

® iPod is a registered trademark of Apple, Inc. All rights reserved. iPod not included.

® Pandora, the Pandora logo and other Pandora marks are trademarks or registered trademarks of Pandora Media, Inc. or its subsidiaries worldwide.