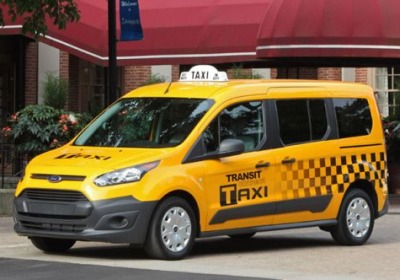 New York City may have selected its taxi of tomorrow, but there are still plenty of municipalities across the US with citizens that depend on yellow livery cars to get them across town in a jiffy. That's why Ford is going ahead with this, the new Transit Connect Taxi.

Based on the 2014 Transit Connect, the TC Taxi boasts a number of features designed to make the compact van appeal to discerning taxi drivers and their fares, with the most notable upgrade being a standardized prep package to convert the 2.5-liter four to run on liquefied petroleum or compressed natural gas. The clean-burning fuel options will allow operators to save on fuel costs and cut down on pollution without sacrificing performance.

A lower load floor and a new twist-beam rear suspension are meant to improve the riding experience for passengers, while the longer 2014 Transit Connect sports extra cargo space as well. In addition to the CNG/LPG conversion, the Transit Connect Taxi can also be easily modified for wheelchair access. Drivers, meanwhile, will have access to optional goodies like Sync with MyFord Touch and a rear-view camera.

Ford's old taxi, the beloved Crown Victoria, was renowned for its durability. As it's quite interested in maintaining that legacy in the new Transit Connect Taxi, the Blue Oval has gone to great lengths to ensure the new van is just as dependable as the old Crown Vic by testing some of the most stressed components. The doors, for example, were opened and slammed 250,000 times during testing. The 2014 Ford Transit Connect Taxi was unveiled yesterday at the 2013 International Association of Transportation Regulators Conference in St. Louis, and will arrive at dealers early in 2014. Scroll on down below for the full press release.

· Redesign lowers vehicle floor for improved access to the cabin; vehicle can be modified to be wheelchair-accessible through Ford's Qualified Vehicle Modifier program

The redesigned Ford Transit Connect Taxi was unveiled today at the 2013 International Association of Transportation Regulators Conference in St. Louis. It has been engineered to Ford's light-truck commercial durability standards.

"We're leveraging our longtime leadership and expertise in the North American taxi market to ensure Transit Connect Taxi exceeds the expectations of taxi operators and their passengers," said Tim Stoehr, commercial truck marketing manager for Ford. "Transit Connect Taxi has been popular in major metropolitan cities since it debuted in 2010, and it has only gotten better."

The second-generation Transit Connect Taxi is also longer, offering seating for five and increased cargo capacity. The roomy, flexible interior is perfectly suited for livery service and conversion to CNG and LPG. The vehicle's cargo space accommodates a compressed gas tank, while leaving ample room for luggage and passenger headroom and legroom. It features an anticipated best-in-class 60.5 cubic feet of cargo volume behind the second row.

The vehicle's floor has been lowered for improved access to the cabin, and can be modified to be wheelchair-accessible through Ford's Qualified Vehicle Modifier program.

"The new Transit Connect Taxi has been designed with the for-hire transportation driver and their passengers in mind, creating a product that combines stylish looks and improved comfort with legendary Built Ford Tough quality," said Gerald Koss, fleet marketing manager for Ford.

Ford began offering Transit Connect Taxi with the 2011 model year, providing a commercial vehicle that is tested to the company's toughest truck standards.

"Transit Connect was originally selected from Ford's global portfolio of high-quality products to bring the advantages of alternative fuel as well as an outstanding interior package to the for-hire transportation industry," Stoehr said.

The 2014 Ford Transit Connect Taxi will go into production and arrive in dealerships by early next year.