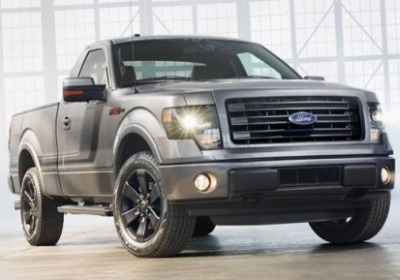 Like most quakes, the 2014 Ford F-150 Tremor caught us by surprise. We weren't expecting Ford to offer up another version of its best-seller so soon before the truck's full redesign, but that's exactly what the company is doing.

While Ford calls the Tremor a "performance truck," the new pickup doesn't play on the same level as the SVT Raptor does on dirt, or even the long-gone SVT Lightning did on pavement. Think of it as a parts bin sport truck that probably does a better job looking the part than acting it. The Tremor utilizes the same twin-turbo, 3.5-liter EcoBoost V6 available across the F-150 lineup, producing 365 horsepower and 420 pound-feet of torque, but matches it with a 4.10 rear axle – the shortest final drive ratio you can get in an F-150 – for the strongest possible acceleration.

The Tremor does do a decent job looking the part. Available only in short-wheelbase, regular cab configuration with your choice of two- or four-wheel drive, it struts around wearing the F-150's FX Appearance Package, flat black accents, 20-inch black wheels, HID headlights and a special exterior graphics package. The Tremor is the only regular cab F-150 with a flow-through center console, which means it also gets a floor-mounted shifter and bucket seats that are covered in black leather with red piping. Some brushed metal accents and steering wheel with red stitching round out the interior upgrades.

Ford has yet to release pricing for the 2014 F-150 Tremor, but you can read the company's official line on its latest model below.

The short-wheelbase, regular-cab Tremor goes on sale this fall delivering distinctive looks and performance. The all-new truck couples the style of the FX Appearance Package with an EcoBoost engine and a launch-optimized 4.10 rear axle – the shortest final drive ratio offered in an EcoBoost F-150 – helping provide customers with fast acceleration.

"The new Tremor gives F-150 customers yet another option to drive a highly capable, distinctive performance truck with features typically found only in the aftermarket," said Brian Bell, F-150 product marketing manager. "Plus, the Built Ford Tough EcoBoost engine is available for the first time in a short-wheelbase F-150."

An electronic locking rear differential that's standard for both two- and four-wheel-drive versions helps deliver the power to the pavement by improving traction during takeoff.

Connectivity comes standard on F-150 Tremor with MyFord Touch® powered by SYNC®. Designers have optimized the physical interface for MyFord Touch to accommodate truck users who may be wearing work gloves by providing easy access to climate controls and audio presets on the center stack.