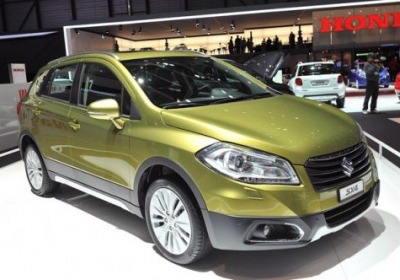 Despite the fact that the coffin has been sealed on Suzuki's US automotive arm, the brand is carrying on elsewhere in the world. The first new product to spearhead the Japanese automaker's product offerings in Europe is this SX4 crossover, making its official debut here at the 2013 Geneva Motor Show. You may remember the little SX4 as the cheapest all-wheel-drive car on sale in the US, packing cute styling and efficient, affordable packaging. And it doesn't appear that the formula has changed too much for this new generation, despite what we think are less attractive new duds derived from Suzuki's 2012 S Cross Concept.

The new SX4 is powered by a choice of two 1.6-liter engines – one diesel, one petrol – the former mated to a six-speed manual transmission while the latter uses a CVT with a "seven-speed manual mode" operated by steering wheel-mounted paddles. All-wheel drive remains intact on the SX4, now with four driver-selectable modes and the Allgrip name.

Suzuki is touting the SX4 as having the world's first double sliding glass sunroof, offering "the largest opening areas" in the segment. Overall, the updated interior looks nicely designed and quite functional, though not exactly a shining beacon of refinement.

Take a look at the new SX4 in our pair of high-res image galleries above and below, and scroll down to view the SX4 in action and check out the official press release.

Suzuki Motor Corporation is unveiling its all-new SX4 Crossover at the 83rd Geneva International Motor Show on 5th March. The new SX4 Crossover is a production model based on the S-Cross, which Suzuki showcased at the 2012 Paris Motor Show.

Suzuki's designers and engineers began developing the new model as a successor to the current SX4. However, through the pursuit of responding to customer expectations with regard to crossovers in Europe and other parts of the world, they realised that they needed to "think bigger". While moving into the C segment with its increased size, the new model inherits the "SX4" emblem to show that Suzuki (represented by the letter "S") is a pioneer of both crossover and four-wheel drive (indicated by the "X" and "4" respectively).

Suzuki created the new SX4 Crossover by uniting its compact car know-how with technologies honed for sport utility vehicles. As a result of focussing on giving the new SX4 Crossover distinctive crossover styling, class leading space for passengers and luggage, next generation 4WD performance and one of the lowest CO2 emissions in the segment, it achieves a remarkable combination of styling, utility, performance and fuel economy. It is a model which can offer great driving enjoyment and versatile family usage for even more people in an even wider range of situations.

Suzuki will be building the new SX4 Crossover at the Magyar Suzuki plant in Hungary and the car will be on sale from this autumn onwards. Magyar Suzuki plays an important role as Suzuki's European production centre. The launch of the new SX4 Crossover marks the start of an expansion programme in which Magyar Suzuki will extend its exports to more countries, increase its production volume, and establish itself as an important manufacturing base for Suzuki's global strategy.

More space for people and luggage
The C segment dimensions benefit families by making the new SX4 Crossover a class leader in terms of passenger space and luggage capacity (430 litres*).

Next generation 4WD with ALLGRIP technology
A new 4WD system has four driver-selectable driving modes for better performance and safety under diverse conditions.

Some of the lowest CO2 emissions in its category
Engine refinements, superior aerodynamics, and the high tensile steel used in the bodywork mean that the new SX4 Crossover has remarkably low CO2 emissions for a C segment crossover.

Emotion
Emotionally appealing features include modulated lines running along the sides from front bumper to rear combination lamps, plus a rounded bonnet which conveys a sense of strength and solidity.

Quality
Quality features include chrome items at the front; LED daytime running lamps in the headlamps; boldly contoured shoulders along the side lines; and two part rear combination lamps.

Aerodynamics
Aerodynamics are expressed and achieved in every area of the design, such as the roof line which slopes downwards towards the rear; smooth contours across the side of the body; a modulated line running from front to rear; low drag wheels and door mirrors.

Emotion
Emotionally appealing features include an instrument panel which is shaped to give a sense of width and dynamism.

Quality
The contours of the instrument panel overlap the doors and the soft padding is pleasant to touch. The seats are shaped and stitched to convey a sense of sophistication, while the silver decorations create a sporty look against the black interior.

Amethyst Grey Pearl Metallic
A new deep and lustrous grey, with a touch of amethyst evoking a spark in darkness.

The new SX4 Crossover's powertrain technologies ensure environmental compatibility while delivering all the performance needed in a C segment crossover.

The engine options are 1.6-litre petrol and 1.6-litre diesel.

1.6-litre diesel engine
Lightness and low friction help to give the 1.6-litre diesel engine superior fuel economy. A variable geometry turbocharger ensures plenty of torque from the low end of the rev range, so the driver can enjoy powerful, perfect torque performance at all times. A newly designed sound insulating engine cover increases passenger comfort by suppressing the vibration and noise that characterise diesel engines.

Transmission systems designed for the new SX4 Crossover help to improve performance and fuel economy and ensure the type of easy, sporty gear shifting which makes driving so enjoyable.

CVT transmission
The continuously variable transmission (CVT) has an auxiliary transmission which extends the range of gear ratios for an outstanding combination of acceleration, hill climbing performance and fuel economy. A straight shift gate provides ease of use. Plus, a seven speed manual mode allows the driver to shift up and down using paddles without letting go of the steering wheel.

The CO2 emissions target for the new SX4Crossover petrol models are

- Light but impact absorbing body and various safety features designed for five star Euro NCAP rating*
- The new SX4 Crossover gives both drivers and passengers peace of mind in everyday motoring by means of its superior stability and comprehensive active and passive safety facilities. It also incorporates a range of standard safety features which protect pedestrians.

*Based on Suzuki's evaluations

- An interior environment designed for comfort on long journeys
- One of the largest luggage capacities in its class (430 litres)
- A panoramic sunroof with one of the largest opening areas in its class and world first* double sliding glass panels
- A spacious, airy cabin and a generously sized luggage area ensure convenience and comfort for the whole family during day-to-day commutes and extended weekend trips.

4,300mm overall length and a 2,600mm wheelbase allow plenty of cabin space; the distance between front and rear occupants is 814mm.

The front seatbacks are shaped to give rear passengers plenty of knee clearance. Even long journeys are relaxing. And even with the rear seat in an upright position, the new SX4 Crossover is a class leader in terms of luggage capacity (430 litres).

The rear seat and a luggage board can be repositioned to accommodate different kinds of luggage, making the new SX4 Crossover ideal for families.

See also: Suzuki Chapter 11 bankruptcy plans approved by US court, Suzuki teases production C-segment crossover, could it have saved them in US?, This is the facelifted Suzuki SX4 that we won't get.