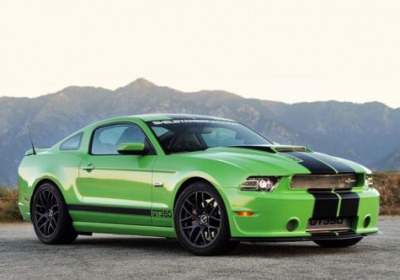 Shelby is a name as synonymous with the Ford Mustang as marshmallows are with campfires. But unlike the short-lived sugary confection that is prepared on a stick, the late Carroll Shelby's name on the placard means added performance and exclusivity. Launched in 1965, the automaker's celebrated early cars were in production for a limited run - today, a mint concours-quality 1965 Shelby GT350 can sell for upwards of $350,000.

To coincide with the 45th anniversary of the original Shelby GT350, Shelby American reintroduced the GT350 in 2011. Like the original, it was only offered in white with blue stripes. Customers were offered a choice between naturally aspirated (440 horsepower) and two levels of supercharging (525 horsepower with a warranty or 624 horsepower without). The manufacturer calls the GT350 a "post-title" package, a term that means it starts out life as a stock Mustang and is modified outside Ford's factory (this is in contrast to the Shelby GT500, which is a standard Ford production car).

As the GT350 enters its third year, Shelby has made several changes. Mechanically, Wilwood brakes replace Baer units and Recaro seats and a tinted glass roof are on the options list. Cosmetically, the vehicle is now offered in most of the Blue Oval's factory colors, new multispoke wheels are available in Satin Black or Bright Silver Metallic finish, and customers can choose between Satin Black, Silver or Gloss White stripes (or Azure Blue Metallic on Performance White or Ingot Silver). Aesthetically, the look of the car has also changed somewhat - keen eyes will note that it actually appears more 'stock' than it did last year.